Two days ago I scolded Deadline‘s Mike Fleming for not even mentioning the Phil Spector movie that Barry Levinson and Al Pacino had decided to make together (according to a 10.8.10 Brooks Barnes N.Y. Times story) in the midst of a 6.10 Levinson interview piece. 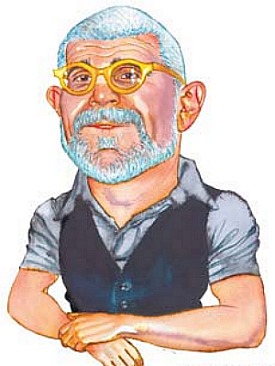 Well, it turns out that David Mamet, rightwing author of the Spector biopic screenplay, is going to direct, and not Levinson. Mamet confirmed this to Financial Times writer Jon Gapper in a piece that went up yesterday.

Mamet “is in New York with his producer to scout locations for a film he has written and will direct for HBO about Phil Spector, the legendary music producer,” Gapper writes.

“Spector, to be played by Al Pacino with Bette Midler as his lawyer, Linda Kenney Baden, was jailed for murder in 2008 after being convicted of the killing of Lana Clarkson, an actress, at his California mansion.

“I don’t think he’s guilty,” says Mamet. “I definitely think there is reasonable doubt. They should never have sent him away. Whether he did it or not, we’ll never know but if he’d just been a regular citizen, they never would have indicted him.”

I’m as appalled as the next lefty at Mamet’s conversion to arch-conservatism, but I agree with him on this last point. Spector was vigorously and relentlessly prosecuted because he was the arrogant Phil Spector of legend with the mansion and the bodyguards, etc.