Both Variety‘s Robert Koehler and CHUD’s Devin Faraci have recently driven out to Claremont to see Religulous, and have today posted poz reviews, Koehler calling it “brilliant” and “incendiary” and Faraci saying that anti-religion barbs aside, it “stacks up really well” as a film. 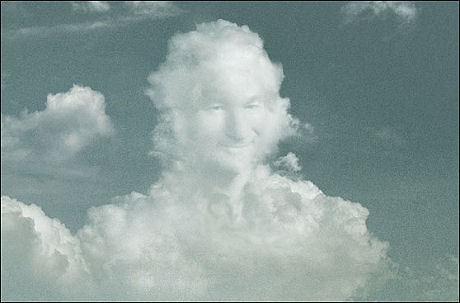 On top of which The Envelope‘s Tom O’Neil, who caught the Bill Maher-Larry Charles doc at a New York screening in Tuesday, is saying it’s clearly “in the derby” due to this week’s Oscar-qualifying bookings, the rave responses and the fact that savvy big-time publicists Michele Robertson and Jeff Hill have been hired to push an awards campaign.
“The only recent comparable example of entertainers venturing into such serious cultural-political territory is Penn & Teller‘s Showtime series Bullshit!, which skewers sacred cows from a skeptical-libertarian perspective,” Koehler notes. “Charles’ previous smash, Borat, used funnyman Sacha Baron Cohen to make satirical/political points, but the particular intensity and seriousness of Maher’s project are nearly unprecedented.
“Indeed, its arrival shortly after the death of George Carlin — a profound influence on Maher’s standup act and politics — suggests the kind of film Carlin might have made in his prime.
“Considering he was once a minor comic on the circuit and a supporting thesp in generally awful film comedies, Maher’s transformation into one of America’s sharpest social critics is remarkable. He takes no script credit, but his periodic monologues to the camera are undeniably written, and written well.
“Ending minutes, though, will catch auds up short: Suddenly, the laughs die down, and as in his closing monologues on Real Time, Maher turns deadly serious with a final statement that will stir raging arguments in theater lobbies.” 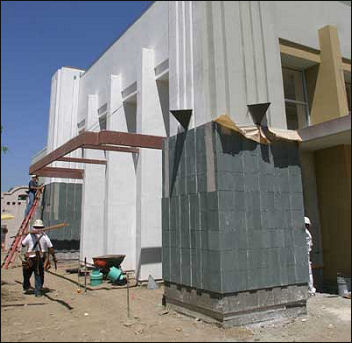 Laemmle’s Claremont during construction phase prior to opening last year.

Faraci notes that “the basic concept has Maher traveling around the world talking to believers about what they believe, and most importantly why (or how they can believe it, for that matter). From the Holy Land to the Holy Land Experience theme park in Florida, Maher goes where the believers are and engages them on their home turf. That makes a huge difference in how the film feels, as does the fact that he actually confronts them.
“Religulous is directed by comic genius and Borat helmer Larry Charles, and it would have been easy to do this movie in a similar vein to that one — letting these people dig themselves a ridiculous hole with their own words — but Maher isn’t interested in that. He wants to interact with these people, to confront them with the logic-hating aspects of their faiths and see what they come back with.
“That’s where I think the movie succeeds the most, but also one of the main places where detractors will come after it. They’ll say that Maher is looking just to clown these people, but that isn’t the case. He’s more than slightly exasperated with the cop-out answers that people give him (to the point where he actually gets kind of excited when a Jesus impersonater explains the paradoxical Holy Trinity by comparing it to the three states of water — it’s bullshit, Maher says, but it’s interesting and new bullshit to him).
“This film is supposed to be funny so he’s being funny, but he’s also being fair. He’s asking these people straight, direct questions. In return he’s getting garbage like ‘What if you die and find out you’re wrong?'”