John Hillcoat‘s The Road, which screens today at the Venice Film Festival after months of being kept out of sight by the Weinstein brothers after postponing its release from the end of last year, has been totally dismissed by Variety‘s Todd McCarthy. The opening graph of his review says “this Road leads nowhere” and that “it falls short on every front.” 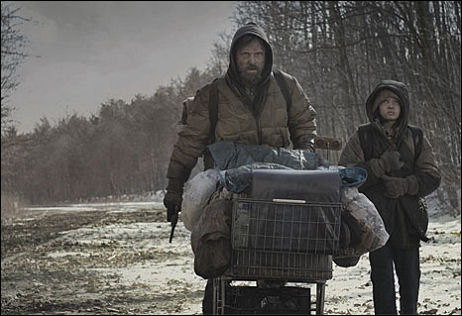 The drama as composed by novelist Cormac McCarthy in his 2006 novel “is one little genre step away from being an outright zombie movie,” McCarthy observes. “[And this is] something that’s much more evident onscreen, with its drooling, crusty-toothed aggressors and live humans with missing limbs; memories of Night of the Living Dead unavoidably advance in all the scenes in which Viggo Mortensen and son Kodi Smit-McPhee take refuge in a house, where they must contend with unfriendly marauders.

“But Hillcoat, who played with heavy violence in The Proposition and made some of it stick, shows no talent for or inclination toward setting up a scene here; any number of sequences in The Road could have been very suspenseful if built up properly, but Hillcoat, working from a script by Joe Penhall, just hopscotches from scene to scene in almost random fashion without any sense of pacing or dramatic modulation.

“Dialogue that should have been directed with an almost Pinteresque sense of timing is delivered without meaningful shadings, principally by two actors who have no chemistry together. Unfortunately, Mortensen lacks the gravitas to carry the picture; suddenly resembling Gabby Hayes with his whiskers and wayward hair, the actor has no bottom to him, and his interactions with Smit-McPhee, whom one can believe as Charlize Theron‘s son but not Mortensen’s, never come alive. 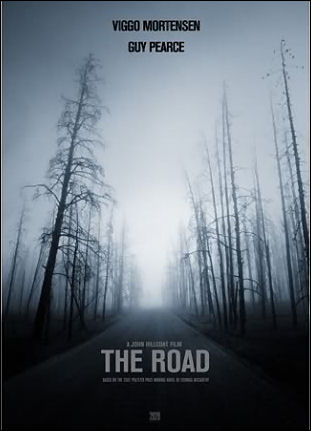 “Tellingly, both thesps are better in their individual scenes with other actors; Mortensen gets into it with Robert Duvall, who plays an old coot met along the road, while Smit-McPhee registers a degree of rapport with Guy Pearce, practically unrecognizable at first as another wanderer. Generally, the boy’s readings are blandly on the nose.

“If you’re going to adapt a book like McCarthy’s bestseller, you’re pretty much obliged to make a terrific film or it’s not worth doing — first because expectations are high, and second, because the picture needs to make it worth people’s while to sit through something so grim.

“Showing clear signs of being test-screened and futzed with to death, the Dimension release may receive a measure of respect in some quarters but is very, very far from the film it should have been, spelling moderate to tepid box-office prospects after big fest preems.”

McCarthy didn’t review The Road out of Venice, but off a showing at LA’s Sunset Screening Room on 8.27.