“Zodiac‘s real protagonist is the hive-mind of obsession blanketing the Bay Area. By and large, the human characters in this tale aren’t given your standard (and often cliched) screenwriting tools of backstory or personal quirks or fleshed-out lives. These actors have to fend for themselves, living off the scraps James Vanderbilt‘s screenplay throws at them. 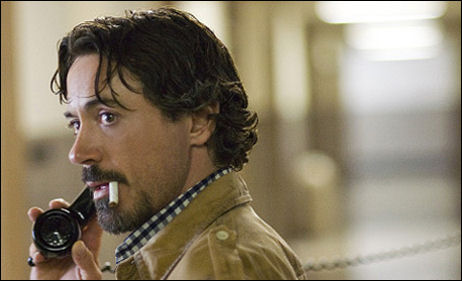 “This is precisely the kind of situation in which Robert Downey thrives. He brings to Paul Avery‘s early scenes a kind of swaggering, wisecracking aura, shot through with vulnerability — which pays dividends as the film’s relentless trajectory brings these characters down.
“Compulsion and self-destruction are nothing new to Downey, whether he’s acting them out in fiction or in real life. And in its portrait of a society coming out of the 60s and plunging headlong into (and out of) the 70s, Zodiac becomes a film about those very things.
“Even though he gets significantly less screen time than nominal lead Jake Gyllenhaal, Downey becomes the film’s chief human connect — the embodiment of nobility and charm, boozing and snorting his way into oblivion as the society he knows crumbles around him. It’s absolutely heartbreaking, and it is absolutely one of the best performances of the year.” — from a 1.10.08 Bilge Ebiri piece, posted by New York‘s “Vulture” column.