Instead of waiting for Wednesday’s Cannes showing, several critics jumped the gun on Robin Hood today. First came Empire, and then Variety and The Hollywood Reporter stepped in with a little wham-bam, and then came Indiewire‘s Todd McCarthy. And some of them have grumbled a bit, and nobody is quite doing cartwheels in the lobby. 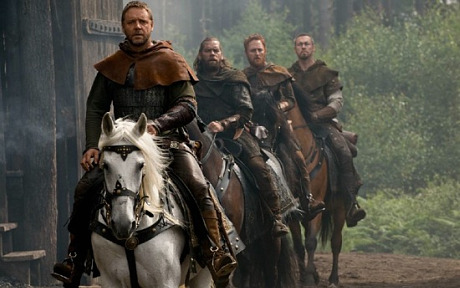 I’m thinking I may as well throw my own two cents in. I mean, the fences are down and this movie needs a friend.

Hasn’t the general Average Joe anticipatory reaction been “what…another Robin Hood? Already? How long ago was the Costner version?” The answer is almost 20 years ago, but I for one am somewhere between fairly and moderately pleased that Ridley Scott’s version doesn’t do the usual usual. It’s an origin story than ends when the other Robin Hood films have begun, and for my meager money it moves along well enough on this particular course. It’s an honorable stab at doing a very familiar thing a bit differently, and since when has that been a crime?

The script is intelligible and intelligent, every frame has been handsomely shot, the production design is first-rate and the cast does its job like the somewhat older pros that most of them are. There are no major under-30 actors in this film except one (i.e., Lea Seydoux as Isabella of Angoulemea) and only a handful of actors iseem to be in their early 30s. Russell Crowe, slimmer than recently but not quite down to his Gladiator weight, has sprigs of gray in his beard, and Cate Blanchett — playing the previously married and widowed Lady Marian — is no spring chicken herself.

No portions of Scott’s film are acutely painful, and almost all of it is, I feel, good enough and often of a very high order (like the French naval invasion sequence). This is a nice “old pro” movie. You’re always aware that you’re in the hands of someone who knows exactly what he’s doing.

Will the Eloi flock to it? Everyone knows the answer to that question, I think. But the Tea Baggers might tell their friends about it because Robin Hood is, philosophically and politically, against tax-and-spend governments and very much with Average Joes. Except Robin Hood’s allies and supporters take care of their teeth and aren’t portrayed as racists so the analogy doesn’t go all the way.

McCarthy calls it “a conjectural origins story about the career birth of England’s legendary people’s outlaw” and says it’s “neither as good as the director’s personal best period epic, Gladiator nor a match for Hollywood’s most memorable previous accounts of the beneficent bandit of Sherwood Forest” but “is, however, superior to the Kevin Costner entry two decades back.

“Earthy, rugged and earnestly advanced in quasi-plausible historical terms, this grandly produced picture can be regarded as something of a tangential sequel to Scott’s ambitious Kingdom of Heaven, with Richard the Lionheart as the connective thread.

“[And yet] what we’re left with is a fashionably gritty period drama, conceived by intelligent minds and handsomely decked out, but featuring no beating heart or compelling raison d’etre.”