Ridley Scott‘s Robin Hood (Universal, 5.14) will have its bicoastal all-media showings on 5.10, but the first peek-out happens tomorrow (same day as the Iron Man 2 all-media screenings). And none too soon for I’m feeling genuine confusion about what the plot and theme may actually be about. 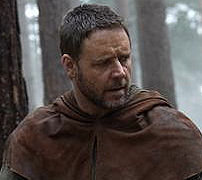 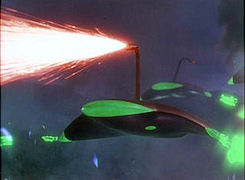 A 5.2 L.A. Times piece by John Horn, which quotes Scott and producer Brian Grazer and screenwriter Brian Helgeland, states that the basic theme is about throwing the bums out — ridding England of “a king with little concern for his subjects — and “[taking] the country back.”

Except Russell Crowe‘s Robin Hood and his merry band of men “are far less interested in redistributing the wealth than making sure King John (Oscar Isaac) focuses on the people in England,” Horn writes.

But “focuses” in what way exactly? What other issue could there be in the 12th Century except the availability of ample food, clothing and shelter for the general populace? Hasn’t economic inequity been the driving theme of all Robin Hood sagas since the days of Douglas Fairbanks? And yet Horn suggests that King John’s primary failing is about not adequately protecting England from French invaders. One indication of John’s corruption, Horn writes, is that he’s “in cahoots with a villainous adviser (Mark Strong‘s Sir Godfrey) who purports to be English, but he’s as French as foie gras.”

And yet on 4.10 Crowe seemed to tell the Sydney Morning Herald‘s Peter Fitzsimons that economic unfairness is the key element.

In other words, Robin believes that England’s 12th Century poor must stand up to greedy royalists and demand a fairer economic shake — isn’t that what Crowe seems to be saying? So how does this square with Horn’s statement that Robin and the boys are “less interested in redistributing the wealth”? And on top of all this the French are invading?

You know what might work? If Robin and King John and the French had a common enemy — i.e., invading aliens from another planet. That, at least, would result in a clear line. We have Cowboys and Aliens coming out next year, and there’s that Pride and Prejudice and Zombies book. Clearly the current direction is to blend history with the fantastical. A Robin Hood-meets-War of the Worlds flick would have been inspired.