Having no doubt heard from numerous irate female producers and representatives of various big-name actresses over Nikki Finke‘s 10.5 report that Warner Bros. is “no longer doing movies with women in the lead,” production president Jeff Robinov has told Variety‘s Anne Thompson that he’s not only “moving forward with several movies with women in the lead,” but is also “offended by rumors of his cinematic misogyny.” 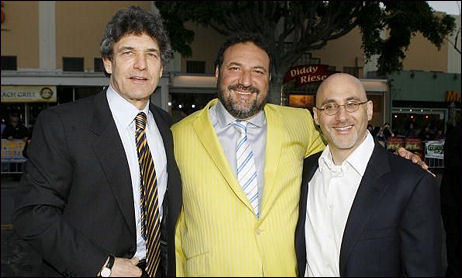 Thompson’s story, which went up last night at 7:30 pm, didn’t mention Finke or her column, alluding instead to “recent reports in the blogosphere.” In fact there was one report (Finke’s) and some reaction pieces.

In fact, what Robinov has told Thompson doesn’t specifically dispute what Finke reported, which I took to mean that Warner Bros. is now thinking twice about greenlighting movies in which women are the absolute stand-alone leads, particularly films in the action realm. The various projects Robinov mentioned to Thompson all have strong parts for women, but none that fit this precise definition. (Robinov saying that he’s “still seeking the right script and star for a Wonder Woman feature, which has been in development for a decade” is well and good, but earnest intentions and $1.50 will get you a bus ticket.)

My riff last Sunday voiced a suspicion that Robinov probably didn’t say what the sometimes strident and simplistic Finke reported, speculating that “Finke’s interpretation of what Robinov actually said (or may have said) probably misses certain shadings and qualifications.”

I doubt that Finke made up Robinov’s alleged statement or sentiment out of whole cloth. He probably expressed disappointment about the revenues brought in by three recent WB female actioners — The Brave One, The Invasion and The Reaping — and perhaps voiced some offhanded remark to an agent or a producer about femme-topped action films that he’s since come to regret.

Robinov made a strong case in Thompson’s piece about making (or intending to make) movies with strong female roles, but he didn’t name any current or hoped-for projects in which women are the clear and unchallenged lead (as, say, Jodie Foster is in The Brave One), and certainly none in the action genre, which is generally thought to be a male-driven thing both in front of and behind the camera, and in terms of moviegoers.

Robinov reminded Thompson about the Wonder Woman character being a prominent player in The Justice League and that Silk Spectre “leads” in Alan Moore‘s Watchmen. He also mentioned female co-stars in the upcoming Speed Racer and Get Smart.

Robinov also said he would “happily” make Nikki Caro and Charlize Theron‘s North Country again (even though it bombed), and that he wanted to produce Peter Jackson‘s The Lovely Bones, which is about a young girl, and the Sex in the City movie.

I said last Sunday that “sweeping statements of any kind are unwise” and that “they usually make the speaker sound stupid or short-sighted.” MCN’s David Poland was quoted by Showbuzz, a CBS News website, as saying that what Robinov “may have said out loud to an agent was probably indiscreet and stupid” and that “you probably shouldn’t cut yourself off from any genre or niche and say we’re not doing that anymore.”