Screen International‘s Barry Byrne, filing from Madrid, has given Pedro Almodovar‘s Broken Embraces a mixed-positive (or a positive-mixed) review. “A lavish, noirish melodrama sparkling with Almodovar’s trademark humor, the film will thrill his loyal fanbase but perhaps leave a more general public dazed rather than dazzled,” he says. 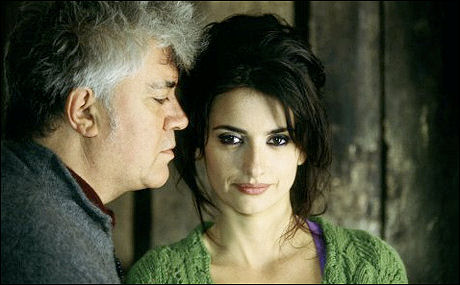 “Ravishing in its artifice and outfitted with all of Almodovar’s stylistic tricks, this tale of desire, power, duplicity and fate is self-consciously steeped in noir conventions and provides Penelope Cruz with a sleek post-Oscar vehicle.

“[And yet] the director can’t quite bring himself to treat his characters with the Olympian detachment noir usually demands. Characters in the Almodovar universe can’t do deadpan delivery, and perhaps throwing in the towel, Almodovar deliciously parodies the typical Veronica Lake-Alan Ladd repartee when he has the lip reader interpret what they’re saying in a marvellous monotone monologue.

“Yet ultimately, Almodovar doesn’t seem comfortable in the cramped noir world of the Madrid film studio and mansion he has built for his pawns, and the second half of the film sees the characters flee to the wide open spaces of the island of Lanzarote. There, the film slips into lush, romantic melodrama against a bleak volcanic landscape.

“With the action moving ponderously towards a baffling denouement, we enter the terrain of high melodrama – sensational revelations and narrative twists. In the midst of all this, there’s an over-long clip from the quirky comedy film-within-a-film.

“It’s symptomatic of the strain in Broken Embraces, which sees the clashing genres of noir, melodrama and comedy vie for supremacy, but it’s a rollicking struggle that, in the hands of consummate ringmaster Almodovar, is a joy to watch.”