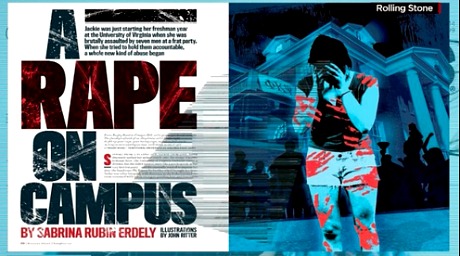 Here‘s how The Daily Beast‘s Jon McWhorter puts it in a 4.6 piece that says Rolling Stone’s ‘Jackie’ retraction “is just the latest example — from O.J. to the Duke lacrosse team case — of political correctness dividing the metaphorical truth from the actual truth.”

McWhorter’s lead graph: “To many, the Columbia Journalism School report on Rolling Stone’s account of an alleged University of Virginia rape case will seem to be a story about media addicted to seeking sensationalism over accuracy. But the whole sordid affair has been about something much larger: the idea that the pursuit of justice can be separated from facts; that metaphorical truth can be more important than literal truth.

Third graph: “Reporter Sabrina Rubin Erdely has been pronounced guilty of ‘confirmation bias’ — she wanted Jackie’s story to be true because it felt dramatically emblematic of the story she wanted to write: universities’ inadequate response to accusations of sexual assault.”

Key quote: “In the UVA case, Ryan Duffin, an undergraduate friend of Jackie’s, has internalized the story-over-facts gospel: ‘It doesn’t matter if it’s true or not, because whether this one incident is true, there’s still a huge problem with sexual assault in the United States.” And there is, especially on college campuses. But that is not the lesson we should learn from the UVA case, which has simply shown the fine line between enlightenment and medievalism when it comes to seeking justice, and how it pollutes journalistic culture — and therefore enlightened conversation — in today’s America.”