Roy Scheider, who had a brilliant eleven-year run as a near-movie star during the ’70s and early ’80s, portraying a series of anxious, somewhat bruised urban hard guys in a nearly unbroken run of top-drawer films, died this afternoon in Little Rock, Arkansas, according to the N.Y. Times. He was 75 years old.

Scheider had “suffered from multiple myeloma for several years, and died of complications from a staph infection,” his wife told the Times.
Scheider’s eleven-year hot streak began with his breakout performance as “Cloudy”, Gene Hackman‘s partner in William Freidkin‘s The French Connection (’71). His next two films, The Seven-Ups and Sheila Levine Is Dead and Living in New York, were substandard but Scheider scored big with his Chief Brody role in Steven Spielberg‘s Jaws (’75). He was almost as good the following year as Dustin Hoffman‘s older intelligence-racket brother in John Schlesinger‘s Marathon Man (’76).
For me, Scheider’s peak was his lead role in Freidkin’s Sorcerer (’77) in which he played the role that Yves Montand became famous for in Henri-Georges Clouzot‘s Wages of Fear, the 1955 French film that Sorcerer was a remake of.
His performance in Jonathan Demme‘s Last Embrace (’78) was emotionally raw and close to the bone. He was even stronger as a Bob Fosse-like character — a self-destructive womanizing choreographer — in Fosse’s All That Jazz (’79). I saw Scheider give a gripping, first-rate performance as the cuckolded publisher husband in a Broadway production of Harold Pinter‘s Betrayal, with Blythe Danner and Raul Julia. His last reasonably decent role in this streak was Dr. Sam Rice in Robert Benton‘s Still of the Night (’82) with Meryl Streep. 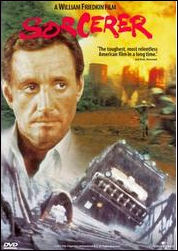 From then on things started to go downhill. Scheider worked and stayed in the groove as best he could, but he seemed to take more and more straight-paycheck jobs. I thought Blue Thunder devalued him because it was basically crap despite the money it made. Playing Dr. Heywood Floyd in 2010 was a terrible thing to have done. Every film he made from ’82 on was either bad, so-so, “meh” or tolerable. The only half-decent film he did in his getting-older-and-grayer period was Bart Freundlich‘s The Myth of Fingerprints (’97).
I interviewed him in late ’81 or ’82 for Us magazine. We met at a coffee shop on either Lexington or Third Avenue somewhere in the mid ’70s. He used to go there after his morning run. He was a good egg, an honest cat and a hard worker. I’m sorry for his family’s loss. Most actors don’t get to flourish with the kind or roles that Scheider was able to land from the early ’70s to the early ’80s. He had a great run, and we’re all richer for that.