I’m attending the big Doubt screening at tonight’s AFI Fest kickoff, but because it’s being digitally projected I was asked — told — not to review it until I see it on a clean 35mm print in Manhattan sometime late next week. That’s the aesthetic exactitude of the film’s producer, Scott Rudin, talking. 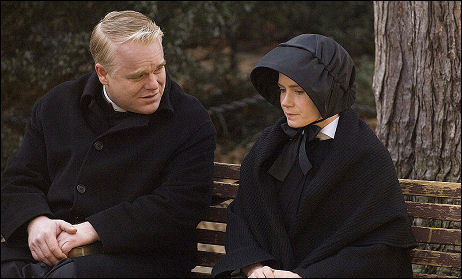 In line with this, Variety‘s Anne Thompson has reported that Rudin “was so appalled at the way the digital projection looked on the curved giant Cinerama Dome screen that he made sure the film will show on three flat screens at the Arclight.”

Correct again. That ultra-curved Cinerama screen is okay for watching revivals of How The West Was Won and It’s a Mad, Mad, Mad, Mad World, but terrible for almost anything else. Alan Parker, some may recall, was so appalled at Evita — shot in 2.35 widescreen — playing there in ’96 that he had a special flat screen installed.”