Reciting the fact that Al Gore is “on the right side of the war, owns the environment. and has already won the popular vote once before,” N.Y. Observer columnist Bruce Fierstein is urgng Gore to announce his Presidential candidacy on 3.25 as he accepts the inevitable Oscar for Best Feature Documentary (i.e., An Inconvenient Truth). 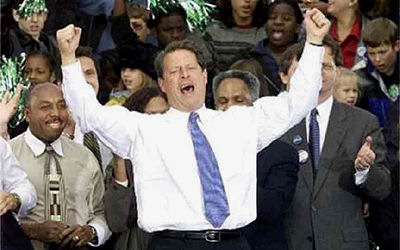 “For all of our sakes, give it a think,” Fierstein pleads. “Make the speech short and self-deprecating and say something to the effect of: “I think I’m supposed to say it’s nice to be nominated. But having been `nominated’ once before, I’ve got to tell you: It’s a lot better to win…which is why, tonight, I’m announcing my candidacy for President. Together, with your help, we can return to the kind of people we once were, and go forward to become the kind of great nation were always destined to be.’

“And that’s it. Over, done and out. And by the time you show up Graydon’s, there won’t be a full checkbook in the house. Get back to me as soon as you can on this, Al. Obama is waiting in the wings. But in the meantime, keep one thing in mind: There’s only one thing Hollywood loves more than a winner — a comeback. Huge it out, babe.”