I stood below the Sunset 5 marquee yesterday evening just before 9 pm, trying to talk myself into seeing Lars and the Real Girl. And once again, for the seventh or eighth time, I said “naaah, later.” A movie journalist repeatedly missing showings of a respected, well-reviewed film like Lars is obviously derelict, but the truth is that I’ve been avoiding it because of my Ryan Gosling problem, which is hard to describe. 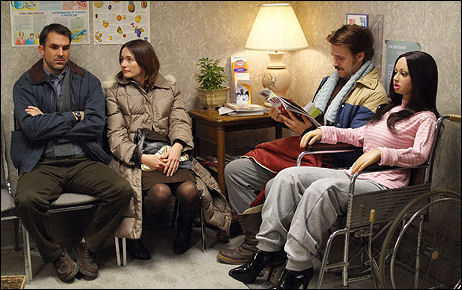 I agree that he’s one of our very best actors of any age — some have called him the new Brando — and yet there’s something about Gosling’s look and manner that has always seemed a bit odd in a visitor-from-another-planet sort of way. To me, he’s always seemed distant and self-regarding. There’s no doubting that every performance he gives is some kind of brilliant, but in my delusional-fan way of absorbing things I’ve never wanted to hang out with the guy. It’s not that I find him dislikable as much as lacking a certain chemical component that I would want in my life.

This is compounded by Gosling having put on weight, grown a blue-collar mous- tache and worn flannel shirts — three style choices I have always had major problems with — for his part in Lars and the Real Girl. It’s obviously a neurotic affliction, but I can’t stand to look at, much less wear, flannel shirts. Strange as this sounds, if I see some some dumpy guy in a bar wearing a flannel shirt I will either go to the other side of the room or leave altogether. Especially if he’s wearing a moustache.

These reactions are aggravated when the wearer is also going with the whole unshaven, slightly greasy-looking rural or suburban working-guy fashion trip, lace-up work boots and all. I know about that mode of appearance — I’ve known dozens of guys who look and dress and live like this — and I want as little to do with it as possible when I go to movies. That may not sound “fair” but that’s how it is.

Plus the idea of a doofus who carries a love doll around is repellent to me. Why should I invest two hours of my time in a guy whose emotional state is this far off the planet?

I realize that it doesn’t get any shallower than when you process a film according to obvious subject matter. I rail against people refusing to see films because of some gut disinterest in subject matter, and here I am doing this very thing. I have no excuse, no defense. I will somehow make myself see Lars and the Real Girl soon, but I may as well be honest and admit that it’s been a real struggle.

“Don’t feel too badly about missing Lars and the Real Girl,” a big-city critic writes. “I found it frankly disgusting, and I don’t think of myself as a prude or conservative. I wonder about what’s missing in the lives of critics who see this film as some kind of affirmation of life.

“It’s about a grown man having a romantic relationship with a plastic doll. He’s a very sick individual, yet the movie wants us to think he can be cured if everybody just tolerates his quirk until he sorts things out.

“No way would an entire town put up with this nonsense. If this were the real world, Lars would be committed pronto, or run out on a rail before Aunt Bea had time to bake a batch of brownies.”