Ryland on “There Will be Blood”

“The horror that is Paul Thomas Anderson‘s fifth feature, There Will Be Blood, is not simply an amplified feeling of distress but distress itself: a seething perpetual pressure, unremitting, brutal, always on the brink of eruption,” writes House Next Door contributor Ryland Walker Knight (excellent name!). 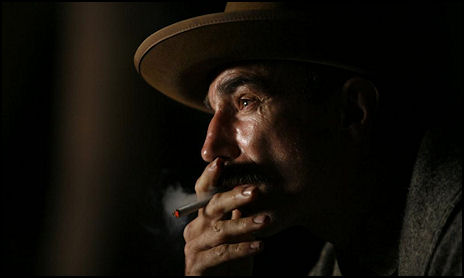 “Yet the threat (or the promise) of the film’s title is a mere hint of the lurking, bubbling terror within. More pointedly, the title — written in a skuzzy, white, printing press Old English across the width of the film’s opening black screen — is the film’s first trigger pulled to wring its audience anxious and uneasy for a terse, dire, cunning two hours and forty minutes.

“Flipping Punch-Drunk Love on its ear, There Will Be Blood‘s operatic score (composed, by Radiohead’s Jonny Greenwood, of dissonant string arrangements and odd percussive rhythms aping Kubrick’s favored Penderecki and Ligeti) amplifies the tension of the film not for a flow of delirious hilarity but for a knotting of orchestrated discomfort. This film denies the release laughter allows. This film will beat you down, bury you under its weight. But your beating will be beautiful.

There Will Be Blood “bears Anderson’s signature throughout. There’s the father-son melodrama, the stately and gliding camerawork, the fear of people, and even a few discomfiting wink-jokes at the audience. Most of all, though, there’s Daniel Day-Lewis, covered in crude oil, raising his arms like a conductor to signal the explosion to begin. It’s terrifying, invigorating, phenomenal. I fear I’ve said too much already.”

Knight ran his review after catching last Monday night’s benefit screening of There Will Be Blood at San Francisco’s Castro theatre.