Eight weeks ago I called Greta Gerwig‘s Lady Bird “the pizazziest, wisest, smartest, most emotionally resonant and complete film I’ve seen at Telluride ’17.” Here it is November 2nd, and I’m thinking those superlatives might apply to the whole year. And hardly anyone is dissenting. 100% on Rotten Tomatoes, 93% on Metacritic. Obviously a Best Picture contender, ditto Gerwig for Best Director, Saoirse Ronan for Best Actress, Laurie Metcalf for Best Supporting Actress.

And yet for the most part the Gold Derby gang has Lady Bird ranked behind Darkest Hour (an impassioned, well-made historical drama that could have been made in 1987), Three Billboards outside Ebbbing, Missouri (a wise, often eloquent film about letting go of anger and yet punctuated with rage and violence for 3/4 of its length) and The Shape of Water (a romantic, sensual fairy tale that charms but with a story that doesn’t quite hold up to logical scrutiny). Lady Bird may be “small” but it has no issues or blemishes. It completely understands itself and how to convey what it’s saying. It’s clever and canny and doesn’t miss a trick. For that you get demerits? 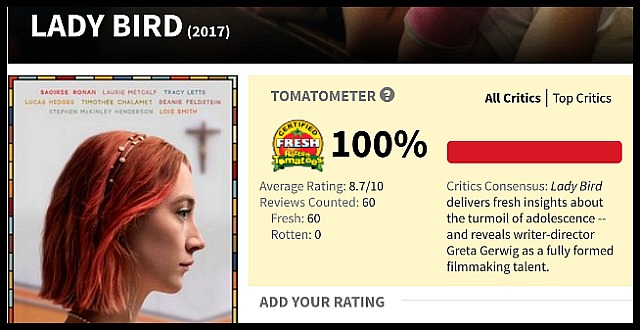 From A.O. Scott’s N.Y. Times review: “I wish I could convey to you just how thrilling this movie is. I wish I could quote all of the jokes and recount the best offbeat bits. I’d tell you about the sad priest and the football coach, about the communion wafers and the Sacramento real estate, about the sly, jaunty editing rhythms, the oddly apt music choices and the way Ms. Ronan drops down on the grass in front of her house when she receives an important piece of mail. I’m tempted to catalog the six different ways the ending can make you cry.”

For those who haven’t paid the slightest attention, Lady Bird is a comically anguished piece of self-portraiture in which the 34 year-old Gerwig recalls and reconstructs (and to some extent re-invents) her life in ’02, when she was finishing high school and dying to get the hell out of Sacramento. Mopey as this may sound, it casts one of those spells that take hold. It’s an amusing, touching, smallish film that glistens and scores and pushes that special button.

Said it before: “Lady Bird is Rushmore’s Daughter — a brainy, girl-centric indie that deals emotionally rounded cards, a Wes Anderson-type deal (sharply disciplined, nicely stylized, just-right music tracks, grainy film-like textures) but without the twee, and with polish and English and all kinds of exacting, soulful self-exposure.

“Ronan’s performance is the take-home, for sure — a pushy, achey but controlled teen thing, almost but not quite in the Max Fischer-Jason Schwartzman mode. She’s also, of course, portraying the young Gerwig. (Her character is called Christine “Lady Bird” McPherson.) You could say that Ronan is inhabiting Gerwig as much as Jesse Eisenberg played a generic Woody Allen-like figure in Cafe Society, only with more energy. In my book this is Ronan’s best performance yet.

“But Laurie Metcalf, as Ronan’s prickly and emotionally frustrated mom, is a stand-out also, and a likely contender for Best Supporting Actress.

Lady Bird is an excitingly honest and beautifully assembled film that tells the often humorous, sometimes abrasive truth about what it’s like to be a bright, passionate 18 year-old with unformed ideas and serious hunger.

Is she a difficult, somewhat prickly character? Yeah, but that’s what precocious often does. Kids say and do unattractive things to each other all the time in high school. And mothers and daughters are often if not always at loggerheads during the teen years. Ronan’s character treats a good friend badly, yes, but she goes back to her at the very end, and Ronan says “I love you” to her mom at the finale. It’s honest, it’s real, it’s Greta’s life…c’mon.