Due respect to the admirable Nicole Kidman, but her Best Supporting Actress SAG nomination for The Paperboy, announced this morning, is, to say the least, a curious call. The Paperboy is an appallingly bad film, and Kidman’s performance as a lacquered, sexed-up Florida floozie is, at best, a tawdry, campy thing. It’s especially regrettable with SAG voters failing to nominate The Master‘s Amy Adams, Silver Linings Playbook‘s Jacki Weaver, Compliance‘s Ann Dowd and/or Arbitrage‘s Susan Sarandon — all far more deserving of a nomination. 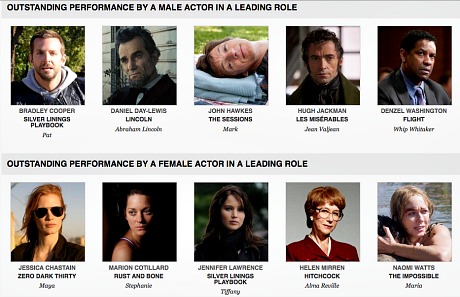 For Best Actor, SAG nominated Lincoln‘s Daniel Day-Lewis (of course), Flight‘s Denzel Washington, The Sessions‘ John Hawkes (fully deserved), Les Miserables‘ Hugh Jackman (which Glenn Kenny will agree with) and Silver Linings Playbook‘s Bradley Cooper (completely deserved up and down). The Master‘s Joaquin Phoenix was blown off, presumably because his imitation of a booze-sipping alien serpent in Paul Thomas Anderson‘s film struck too many SAG voters as egocentric or weird for weird’s sake or whatever. That or his screw-the-Oscars rants did him in. But I’ll never forget his Freddy performance. Tattooed on my brain.

Poor Richard Gere, who gave one of the best two or three performances of his career in Nic Jarecki‘s Arbitrage, didn’t make the cut. Amour‘s Jean-Louis Trintignant was also nudged pushed out onto the fire escape.

SAG Best Supporting Actor nominees include Lincoln‘s Tommy Lee Jones (agreed), Argo‘s Alan Arkin (because he delivers funny lines in his usual deadpan way), Silver Linings Playbook’s Robert De Niro, The Master‘s Philip Seymour Hoffman and — a surprise but fully deserved — Skyfall‘s Javier Bardem. Due respect but I would have I have nominated Matthew McConaguhey in place of Arkin. I have no quarrel at all with SAG ignoring the Django Unchained guys (Christoph Waltz, Leonardo DiCaprio, Samuel L. Jackson) in this category. The movie is mostly cheap dogshit and all these guys do is prance & strut around in Quentinworld.

What about the John Goodman blowoff? Not too long ago I had him pegged for a probable Best Supporting Actor nomination because of two highly likable, big-sell performances — a swaggering, self-amused drug dealer in Flight (his second entrance has audiences cheering) and as amiable makeup artist John Chambers (a real guy who died in ’01) in Argo. Plus he plays a highly sympathetic Atlanta Braves front-office guy who cares a good deal for Clint Eastwood‘s aging scout in Trouble With The Curve. Plus he’s lost all that weight. At least a nomination, right? Nope. What happened here? Was that Xan Brooks Guardian interview partly to blame? 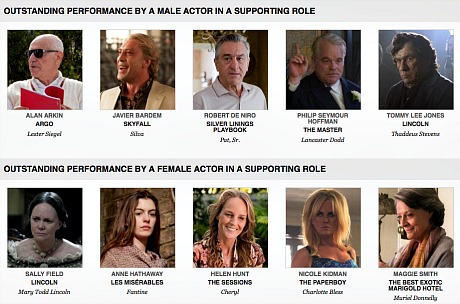