L.A. Times staffer Glenn Bunting got his hands on detailed budget documents for Sahara, a poor man’s Indiana Jones adventure flick with Matthew McConaughey, Penelope Cruz and Steve Zahn that came out in 2005 and lost at least $78 million despite having earned $122 million. That’s because it cost $160 million to make and racked up $81.1 million in distribution expenses. This makes it “one of the biggest financial flops in Hollywood history,” Bunting writes. 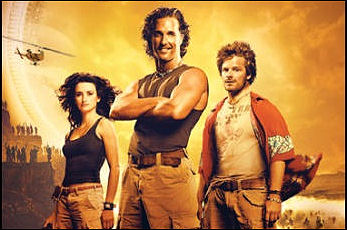 A story based on tangible black-and-white data and the usual verifying and follow-up calls, and Movie City News is calling Bunting’s story “gossip.”

The second I saw the above one-sheet with McConaughey trying to affect a brawny man-of-adventure vibe with his arms folded (i.e., to hide the fact that his arms are disproportionately short — three or four inches shorter and he would almost have Thalidomide-baby flipper arms) and flashing that second-rate-macho, cock-of-the- walk, men’s-cologne-commercial smile, I knew right away I wouldn’t go to the free screening and that I wouldn’t rent it on DVD. I decided that instantly. But now I want to see it because of Bunting’s piece.

“Movie budgets are one of the last remaining secrets in the entertainment business,” Bunting writes, “typically known to only high-level executives, senior producers and accountants. ‘The studios guard that information very, very carefully,’ said Phil Hacker, a senior partner in a Century City accounting firm that audits motion pictures. ‘It is a gossip industry. Everyone wants to know what everyone else is getting paid.'”

Among the tidbits and line items…..

(a) the fact that Sahara has technically lost about $105 million to date, according to a finance executive assigned to the movie, [although] records show the film losing $78.3 million based on Hollywood accounting methods that count projected revenue ($202.9 million in this case) over a 10-year period”;

(b) That among the 1,000 cast and crew members who worked on Sahara, “the highest-paid was McConaughey, who received an $8 million fee, or $615,385 for each week of filming, not including bonuses and other compensation. Cruz earned $1.6 million. Rainn Wilson, who since has raised his profile through roles in “Six Feet Under” and “The Office,” was paid $45,000 for 10 weeks of work.” Hey….what did Zahn make?

(c) a 46-second scene showing the crash of a vintage airplane, shot in London in 2003, cost more than $2 million but was never used in the final film. “In the context of the movie, it didn’t work,” said director Breck Eisner.