If Quentin Tarantino hadn’t thrown a hissy fit over someone within a group of six sending out his Hateful Eight script, he’d be preparing to make the film right now, Bruce Dern would have a new job and everything would be jake. What was the big deal about some non-essentials reading it? Although it’s not unheard of, it’s relatively rare for the script of a high-profile project to not be discreetly shared with outsiders. It was obviously the tantrum — “That’s it…I’m not making this film!” — that started the ball rolling and devalued the project. The Gawker posting was obviously ill-advised, but the Eight script was a dead duck at that point. What kind of damages are Tarantino and his attack-dog attorney Marty Singer seeking from Gawker? Will they cut some kind of deal or are they out for blood? 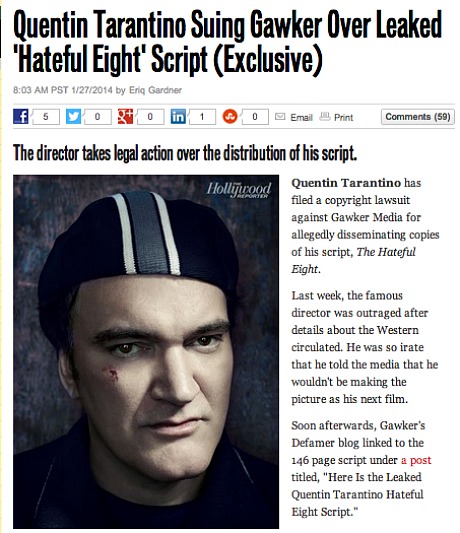 Update: Gawker‘s John Cook has posted a response to the Tarantino/Singer filing. He’s stating that (a) Gawker didn’t “leak” Tarantino’s script but merely posted a link to the script on Anonfiles “because it was news,” and that (b) Tarantino “deliberately turned the leak into a story” and that he “wanted The Hateful Eight to be published on the internet,” having told Deadline‘s Mike Fleming that “I do like the fact that everyone eventually posts it, gets it and reviews it on the net. Frankly, I wouldn’t want it any other way. I like the fact that people like my shit, and that they go out of their way to find it and read it.”