James Franco‘s Saturday Night, which screened this afternoon under the aegis of the Tribeca Film Festival, is a highly intelligent, interesting, amusing, and very decently assembled doc about how the Saturday Night Live team puts a show together. The problem — mine, not the film’s — is that I wrote a full review a few hours ago only to see it wiped out due to not having saved it when Firefox decided to collapse out of the effin’ blue. And I don’t care enough to re-write it. Not now anyway. Too bummed. 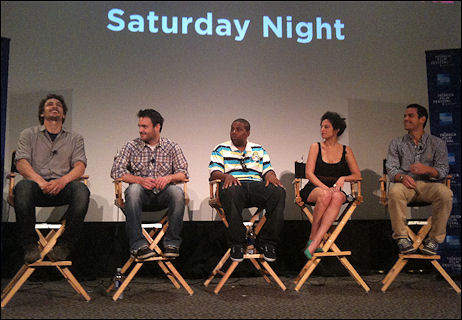 Saturday Night director James Franco (far left) and Entertainment Weekly writer David Karger (far right) during a q & a following a 3 pm screening at the DGA theatre on West 57th Street. That’s Kenan Thompson, of course, in the middle. Many people know the other guy and the girl, I presume — I just don’t happen to be one of them. I only watch SNL sporadically.

I can at least force this out: Franco has shot and cut his film with a sharp observational eye, and seems to have gone with a moderately laid-back, come-what-may, go-with-the flow strategy. Which is more or less how the preparation of the show goes, so it all fits. I came away with a newfound respect for Lorne Michaels and the gang.

The SNL process is a bitch. 50 sketches pitched on Monday, a reading on Wednesday, Lorne Michaels and his producers choosing nine finalists, two days or refining and rehearsals, a full-dress performance before a crowd early Saturday night to see what works and what doesn’t, and then the final airing at 11:30 pm. A day of non-rest for the eternally weary on Sunday, and then right back into it on Monday.

I just can’t get past having lost what I wrote. I’m so angry I can’t think.

Please forgive the quality of these two video clips. I forgot the trusty Canon SD 1400 IS; had to shoot with the iPhone.