I can only repeat that I was completely on Schumer’s side all the way through, and thoroughly rooting for the success of her love affair with Bill Hader, who gives his best performance ever (even better than he was in The Skeleton Twins, which is saying something) as a flush, mild-mannered sport surgeon. But of course, given the rules and general intentions of films like this, we know what’ll happen at the end.

All I can tell you is that Schumer is wickedly hilarious and a total pistolero, and that she also shifts into downshift mode and opens herself up emotionally in ways that truly floored me. I love how you can read each and every flickering emotion and thought that passes through her lightning-fast brain — you can read it all at the drop of a hat. I’m telling you that she tears up and touches bottom and whacks the ball just as hard and long as Jennifer Lawrence did in Silver Linings Playbook, and we all know what happened there. She’s delivering something brand new (obviously based on her standup persona and whomever she is deep down) but at the same time channelling the freshness of Judy Holliday and Jack Lemmon during his peak period in the late ’50s and early ’60s. Just like that Schumer is here to stay. Get used to that. 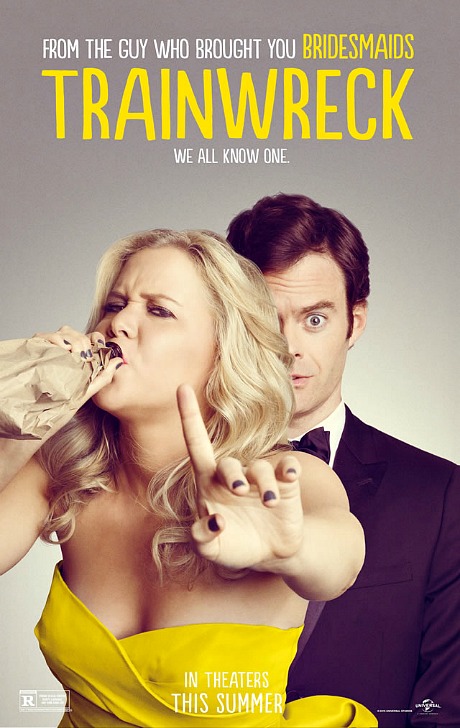 Trainwreck is about a spirited, reasonably attractive, whipsmart, seemingly alcoholic staffer (Schumer’s Amy Townsend) at a Maxim-like magazine, which is run by an Anna Wintour-like editor (played by an all-but-unrecognizable Tilda Swinton). Amy likes dick but doesn’t want to know from trust or relationships or monogamy, and is reasonably happy with her run-around life for the most part. Her emotional attitude comes from her smart-assed, alcoholic dad (Colin Quinn) who was never much of a nurturer for Amy or her sister (played as a grownup by Brie Larson) and who constantly catted around behind their mom’s back. Now he’s old and afflicted and living in a seniors’ home, but the influence lingers. Dysfunction breeds dysfunction.

And then along comes the almost-too-good-to-be-true Hader, whom Amy has been told to profile for Swinton’s magazine. Hader really likes her, doesn’t miss a trick and is an all-around good egg. Before you know it they’re boinking. What are the obstacles to things working out? Amy’s basic nature, for the most part, including an alcohol problem and a hair-trigger attitude when it comes to confronting hurt feelings and whatnot. Hader has to work past natural trepidations about falling for someone who might be too unstable or volatile to go the distance. Amy needs to tuck dad into bed in more ways than one and find the strength to be open and, if necessary, vulnerable and…you know, do the growing-up thing.

I have to say I was shocked last night to learn that a prominent female employee of one of the trades has said she isn’t much of a fan…the fuck? We’re living in a near-revolutionary time for women in Hollywood (or one that seems to be heading in that direction) and Schumer is playing one of the most provocative and compellingly-written 21st Century females ever seen on the big screen, and a female journalist has some kind of problem with that?

I’m also stunned by a reaction from Coming Soon‘s Ed Douglas, who wrote on 6.28 that “I’m not really sure I like Amy’s character, which kept me from absolutely loving Trainwreck, as funny as it gets at times. Amy isn’t someone I would have in my circle of friends, regardless of how honest she is about sex and relationships.” I am on the other side of the Grand Canyon here. Amy’s character is exactly the kind of woman I can be completely honest with and trust and talk to for hours on end. She can insult me any time she wants and I’ll roll with it because she’s a Type-A creative — a clear-light, take-no-shit, bored-by-boring-people type of gal.

The only soft, run-of-the-mill scene in Trainwreck comes the very end but it’s fine, what the hell…I gave it a pass. So much of what had come before was so good.

I loved the self-portraiture by Lebron James and particularly a scene when he talks to Amy about her thing with Hader and looks her straight in the eye and says “don’t hurt him” and holds the gaze. I was absolutely rolling on the floor when Swinton tried to counsel Amy about grief. And I was also delighted by the great Norman Lloyd, cast as a tart-tongued fellow who resides at Quinn’s assisted-living home.