One final reminder to bulldoze your reluctant N.Y. and L.A. friends into seeing The Assassination of Jesse James by the Coward Robert Ford tomorrow, Saturday or Sunday, and get those guldarned, dad-blasted per-screen averages up where they damn well oughta be for a film this plum mesmerizing. If any varmints and polecats need a further nudge, here‘s Liza Schwarzbaum‘s A-plus review in Entertainment Weekly: 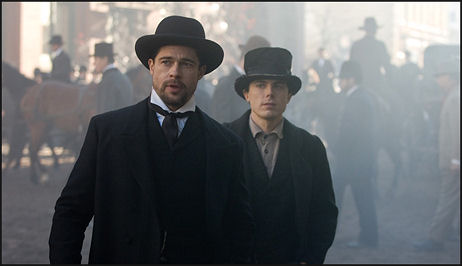 “The Assassination of Jesse James by the Coward Robert Ford — a haunting retelling of one of the enduring outlaw sagas in American culture — is shot by the brilliant cinematographer Roger Deakins in a wide-open geography of moody skies and fields plaintive with bent light and shadow,” she writes. “Yet the psychological heart of the matter is dark, secretive, and daringly interior.

“This masterful Western by New Zealand filmmaker Andrew Dominik (Chopper), based on the 1983 book by Ron Hansen, dips into the genre-bending influences of wild-card Westerns from the late ’60s and ’70s like Bonnie and Clyde and Days of Heaven for its elegiacally fatalistic tone.

“Yet the picture emerges with something very much plaguing the 21st century on its mind — a cool acceptance of lethal paranoia as the natural state brought on by the weight of too much legend-building and the warp of too much unrequited fandom.

“The charismatic, bank-robbing, gunslinging James, after all, was shot in the back by a puny would-be tagalong who claimed to be the gang leader’s biggest fan, and this is one rueful recounting of how it all went down. Stories about the loneliness of celebrity and the dangers of firearms rarely get starker or more mesmerizing than that.”