“An air of irresolution nonetheless lingers around In the Valley of Elah,” writes N.Y. Times critic A.O. Scott, “a sorrowful, frustrated sense that the deepest mysteries cannot be contained within any narrative framework. Underneath its deceptively quiet surface is a raw, angry, earnest attempt to grasp the moral consequences of the war in Iraq, and to stare without blinking into the chasm that divides those who are fighting it from their families, their fellow citizens and one another. 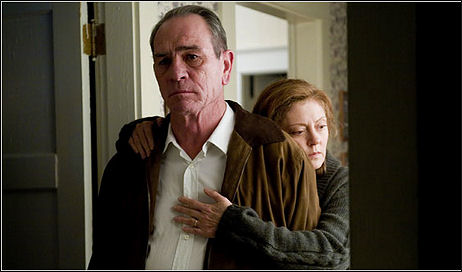 “Not that the [film’s] message is ambiguous or unclear. The message is that the war in Iraq has damaged this country in ways we have only begun to grasp. For some people this will seem like old news. Others — in particular those who pretend that railing against movies they havenÃ¢â‚¬â„¢t seen is a form of rational political discourse — may persuade themselves that it is provocative or controversial.

“Almost no violence takes place on screen, but there are times when Elah feels almost like a horror film. Its steady crescendo of suspense builds toward the revelation — and vanquishing — of some unspeakable, monstrous evil.

“But since the monster has no identifiable physical shape, it is not so easily defeated. While there are killers, liars and sadists to be found in this movie, there are not really any villains. And there is no reassuring conclusion. If it is anguished, even despairing, In the Valley of Elah is also compassionate. At heart it is a somber ballad about young men who remain lost in a dangerous, confusing place even after they come home.”