Yes, Joe Biden feels and looks too old (that over-sized neck wattle is a real problem), but my insect antennae are sensing that he would win the allegiance of 50-plus conservative hinterland guys, and would therefore beat Donald Trump handily in 2020. Mark Harris nonetheless feels he’s too old, and he’s not wrong about the problem of Biden or Bernie running for a second term. Eliminate those two and who’s left? Elizabeth Warren, Kamala Harris, Kirsten Gillibrand and Meryl Streep. Yes, Streep.

Posted on 7.15.18: “I resent Warren for not mounting a tough challenge against Hillary Clinton in ’15 and ’16. If she had she might’ve saved us from Trump. That aside she has a passionate, humanist schoolmarm voice, and is tough and scrappy.

“I like Sen. Kamala Harris a little more than Warren because she’s even scrappier — you could use the term prosecutorial — and I love the idea of a whipsmart mixed-ethnic woman of 53 (she’ll turn 55 on 10.20.19) running against the dessicated, pot-bellied, none-too-bright Donald Trump, who’ll turn 74 on 6.20.20.” 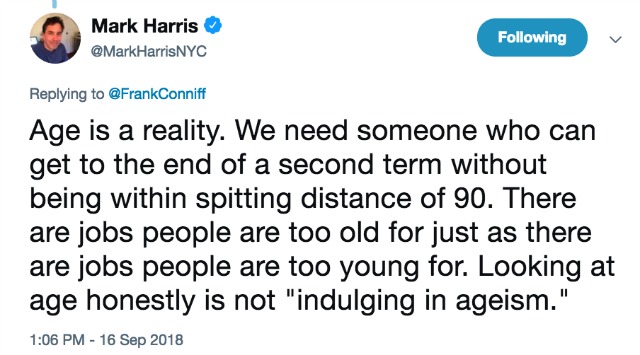 September 16, 2018by Jeffrey Wells102 Comments
« Previous post
Toronto Voters Tumble for “Green Book”
Next post »
This Is Not Cinerama