Between Sips of Fresh-Squeezed Orange Juice and Scrumptious Bites of Salmon, Onion and Cream Cheese Bagels, LAFCA Will Vote This Morning

1:48 PM: Insisting on eccentricity, LAFCA members have named Paterson‘s Adam Driver as their Best Actor choice over the runner-up, Manchester By The Sea‘s Casey Affleck. LAFCA, trust me, is just looking to attract attention. Don’t misunderstand — Driver delivers a gentle, honestly spiritual vibe as a mild-mannered, bus-driver poet in Jim Jarmusch‘s much-admired film. There’s nothing slight about his accomplishment. But it’s nowhere near as shattering or dig-down or bi-layered as Affleck’s performance, not to mention Denzel Washington‘s Fences‘ performance as a bitter father. LAFCA is totally image-obsessed — these choices are all about promoting themselves, their brand, their contrarianism.

1:25 pm: There’s a report that a team of men in white coats carrying large fishnets are heading out to the private home where the Los Angeles Film Critics Association is currently assembled and voting.

1:16 pm: This is getting more and more laughable. LAFCA has awarded its Best Screenplay award to The Lobster, penned by Efthymis Filippou and Yorgos Lanthimos. HE to LAFCA: It wasn’t just my impression that The Lobster withers and dies around the 75-minute mark — a lot of Cannes viewers held the same view. Do you think the screenplay might have had something to do with this? Flip us off, LAFCA! Throw your heads back and shriek with laughter as you (a) revel in contrarianism while (b) giving the finger to the keepers of the reasonable flame (i.e., the Gold Derby/Gurus gang).

12:08 pm: Raoul Peck‘s I Am Not Your Negro, a intelligent recap of the life of the legendary James Baldwin, is a fine if somewhat rote-feeling documentary. But it can’t hold a candle to Ezra Edelman‘s O.J. Made In America. The LAFCA perversity continues unabated. And…it’s lunch time! 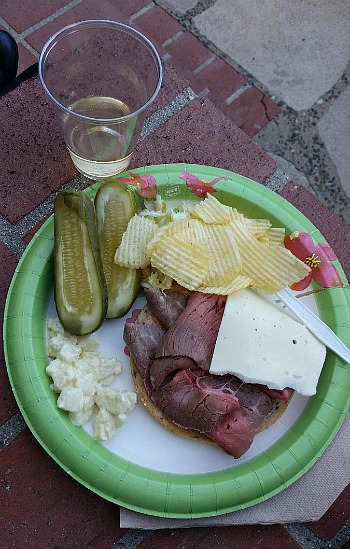 11:54 am: Certain Women‘s Lily Gladstone, who has generated zero buzz among the Gold Derby and Gurus of Gold critics & blogaroos, has won LAFCA’s Best Supporting Actress award. C’mon! This settles it — LAFCA is on a total contrarian p.c. jag. They’re just being different to be different. Yes, I was aware that Gladstone was generating a persistent emotional undercurrent as she stared longingly and obsessively at her object of desire, Kristen Stewart. Yes, I felt all that. And yes, she does a good job taking care of the horses. LAFCA can discount Fences‘ Viola Davis over a conviction that she’s really playing a lead, but choosing Gladstone over Manchester‘s Michelle Williams is nothing short of perverse. This is just a nyah-nyah game to them, led by the Jen Yamato crowd, LAFCA is flipping us off. The word has gone out betweens bites of lox and bagels — if it’s a Manchester nom, it’s a no-go.

11:29 am: LAFCA’s Best Production Design winner is Ryu Seong-hee‘s work on The Handmaiden. It’s getting close to noon, guys. How many different kinds of cream cheese are being served, or are we just sticking to generic Philadelphia brand? Matt Neglia tweet: “LAFCA reeeeaaalllyyy likes La La Land, Moonlight & Silence.”

11:14 am: LAFCA, totally kowtowing to p.c. consensus, hands Best Supporting Actor award to Moonlight‘s Mahershala Ali, who gives a fine and memorable (if less than magnetic) performance. This is because he taught “Little” to swim in the ocean, right? Already things are feeling too Moonlight-y, too foo-foo. Silence‘s Issey (also spelled “Issei”) Ogata was voted first runner-up.

Earlier: Does LAFCA want to be brave and historic in its choice of Best Supporting Actor? Ralph Fiennes for A Bigger Splash. Manchester‘s Lucas Hedges, Fiennes’ only strong competition, would be my choice. The go-along pick would be Moonlight‘s Mahershala Ali, who projects a kindly vibe but has too little screen time (he’s gone after Act One).

10:43 am update: LAFCA hands Best Cinematography award to Moonlight‘s James Laxton with La La Land and Silence as first and second runner-ups. This obviously indicates that Moonlight could take Best Picture. That or Barry Jenkins for Best Director. Or both. 10:40 am: Between LAFCA’s tortoise-like efficiency (took them 40 minutes to decide cinematography award) and the 30-minute brunch break, will they finish voting before I have to leave for the 3 pm Silence screening in Westwood?

Down to it: If LAFCA doesn’t give its Best Actress award to La La Land‘s Emma Stone (who gave far and away the most openly pained and affecting performance), the question will be “what non-industry group, if any, will give it up for her?” But honestly? If they give the prize to Elle‘s Isabelle Huppert, HE will approve. Within that Verhoevian realm, the red-haired mouse killed it.

Wait…Certain Women‘s Lily Gladstone as a dark horse contender for Best Supporting Actress? She (a) took care of the horses and (b) stared longingly and obsessively at Kristen Stewart without saying boo. She left a memorable impression, agreed, but let’s not get carried away.

The Los Angeles Film Critics Association (LAFCA) is the only prestigious film critic group that brazenly, even proudly interrupts its voting process halfway through so the members can chow down on bagels, scrambled eggs and whatnot. Other groups, mindful that people like myself are waiting with bated breath to report their winners, get down to business and do the job. If past procedure is any guide, LAFCA will cast a few votes this morning (starting around 10 am Pacific) until someone says “bagel and cappuccino time!” and the process stops in its tracks for 30 or 40 minutes. I know that guys like Daily News critic Bob Strauss derive great pleasure from goading blogaroos with this delay, but it’s a solemn duty, I feel, to hold LAFCA’s feet to the fire on this issue. 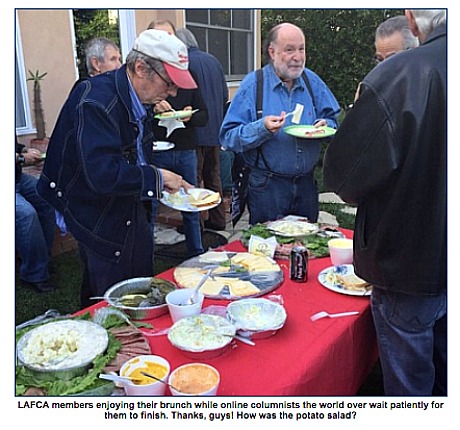 LAFCA members chowing down during 2015 voting — will someone please send me a photo or two of this year’s mid-vote food binge?