Dark Horizons‘ Garth Franklin is mezzo-mezzo on The Hulk, and others, he’s saying, are more or less on the same page. “There’s a definite feeling that there’s a much longer and more substantial movie in here which has been truncated, and talk of Edward Norton‘s unhappiness with the final product is understandable if” — he’s saying if — “many of the deeper character scenes have been left on the editing room floor. 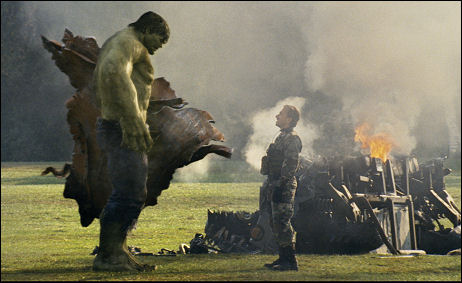 “What remains, though certainly not the dud many were expecting, is not good enough to justify the need for such a restart. Unless you\’re a fan, the new Hulk isn’t one to rush out for, but it is worth catching eventually.” What…on a plane, he means? An iTunes download in September or October?
Franklin says he talked to three reviewers afterwards, and that “no one outright hated but no one really liked it…two gave an ‘it was all right’ reaction.” Proper reviews have started going online as well — very mixed it seems. Here’s Eyefilm, Cinema Blend, Urban Cinefile and Emanuel Levy.
See? See? I told you Kris Tapley wasn’t to be trusted on this one.