Five and a half weeks between a theatrical release (7.12.13) and the DVD/Bluray street date (8.20)…hmmm. Plus the hand of director Mark Steven Johnson (Grumpy Old Men, Simon Birch, Daredevil, When in Rome, the two Ghost Rider pics)…yeah. Plus a title that SCREAMS American Film Market lowlifes hustlin’ ’round Santa Monica in their alligator shoes. Plus Robert DeNiro, the King of Paycheck Performers**, in the lead. I’ll see it nonetheless because it has John Travolta playing a hell-bent Bosnian madman. The more foam-in-the-mouth, the better. 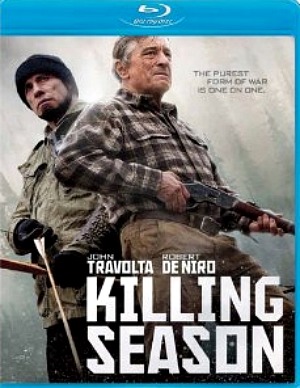 There’s a Deliverance element in this thing. Note Travolta’s bow-and-arrow. And that it was partly shot in the Appalachian Mountains of north Georgia, and that one of the locales was chosen by Johnson “to create the effect and mood he had previously seen in [John Boorman‘s] Deliverance,” according to a 1.21.12 Independent Mail piece.

The project “was originally set in the 1970s and titled Shrapnel,” it says here. It was apparently being pondered by Travolta and Nicolas Cage as a follow-up to Face Off, and by John McTiernan as a directing gig.

Intimidating Wiki Synopsis: “Deep in the Appalachian mountains, a reclusive American military veteran (De Niro) and a European tourist (Travolta) strike up an unlikely friendship. But when the tourist’s true intentions come to light, what follows is a tense battle across some of America’s most forbidding landscape proving the old adage: the purest form of war is one-on-one.”

** De Niro’s closest rival in the straight-paycheck realm is Liam Neeson, but compare their resumes and Neeson can’t hold a candle.