Tomorrow’s Star is reporting that Al and Tipper Gore‘s marriage broke up because Al has been doing the nasty with Inconvenient Truth producer Laurie David, the ex-wife of Larry David, for the last two years. Most guys would say this wasn’t too bad a deal for Fat Al, considering the hotness gap between Tipper and Laurie. The story also, if true, “humanizes” Al — he’s been seen all his life as a bit of a stiff. It’s also a Hollywood-seduces-Washington story if I ever saw one. 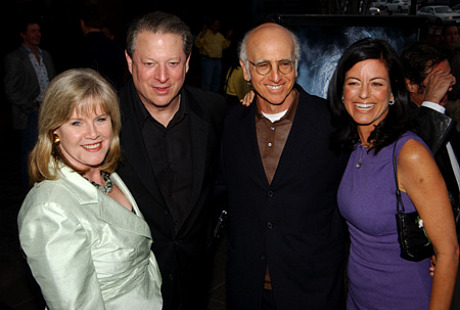 The story may be bogus — N.Y. Daily News reporter Helen Kennedy reports that “Gore’s friends called the story utter nonsense” and Laurie David’s rep is also denying — but at least it sounds like a recognizable human scenario, which is more than you could say for the initial reports that the Gores were splitting up because they’d simply “grown apart.”

If the Al-and-Laurie thing is accurate, I’d like a little credit for writing eight days ago that “older couples don’t break up unless one of the parties is seriously fed up and wants out…something has to be pretty damn intolerable to upset a comfortable 40 year-old apple cart. And most of the time — let’s face it — it’s about the husband wanting to pick up that spear and feel like a hunter again.”

The Enquirer‘s report on the matter allegedly “blame[s] Tipper’s unfounded suspicions of affairs,” according to Kennedy’s story. “Tipper’s jealousy was putting stress on their marriage” and “Al finally told her their relationship was over because he couldn’t stand her jealous rages anymore.”

That’s so Warren Beatty-in-Town and Country if the Star story is true. Guys who are guilty of catting around usually follow Lenny Bruce‘s advice — deny it, deny it, deny it. The devious ones always turn it around and try to blame the trouble on the jealous wife.