As I waited for the lights to come down and Last Flag Flying to begin, I was thinking the following: “This is a 30-years-later Last Detail sequel ** without Jack Nicholson or Randy Quaid and minus the names of the original characters, so it’s obviously going to feel hand-me-downish — not just older and saggier but lacking that Nicholsonian spark. But it still needs to deliver the spirit and character-rich humor and melancholy of Hal Ashby‘s 1973 original. And if it can’t manage that, it needs to invent something else that will work just as well.”

Well, forget all that.

Directed and co-written by Richard Linklater, Last Flag Flying (Amazon / Lionsgate, 11.3) is just a moderately passable older-guy road movie — a doleful, episode-by-episode thing about three ex-servicemen and former buddies — Larry “Doc” Shepherd (Steve Carell), Sal Nealon (Bryan Cranston) and Richard Mueller (Laurence Fishburne) — assessing their lives and the world around them as they escort the casket of Shepherd’s soldier son, recently killed in Iraq, from Dover, Maryland (or Norfolk, Virginia — not sure which) to Portsmouth, New Hampshire. 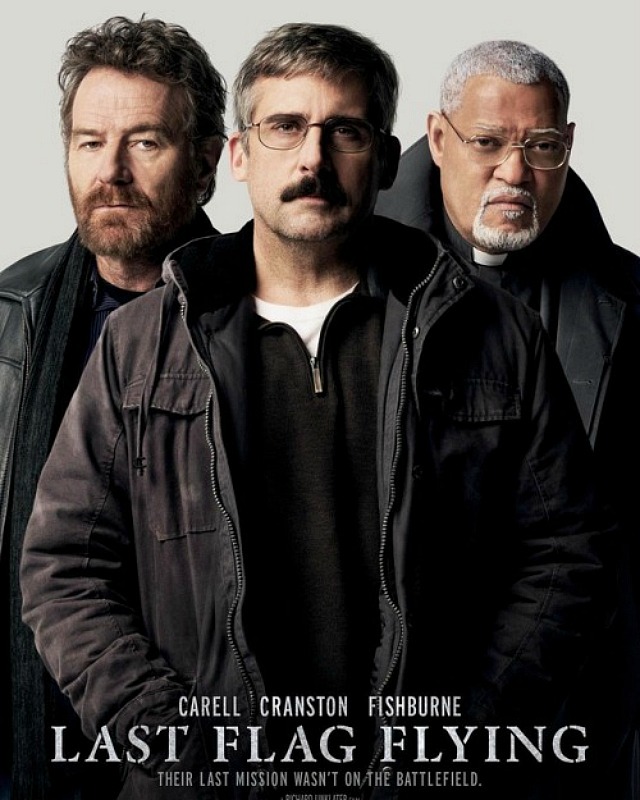 This is nearly the same path, of course, that the original film followed when Badass Buddusky (Nicholson) and Richard “Mule” Mulhall (Otis Young) escorted Larry Meadows (Quaid) to the Portsmouth brig for the crime of having stolen $40 from a polio donation box. For whatever tangled reasons Linklater and original novel author and screenplay co-writer Daryl Poniscan chose to re-name Buddusky as Nealon, Mulhall as Mueller and Meadows as Shepherd. This led to ignoring the Last Detail origin story and making the trio into Vietnam vets with a shared history.

The film mopes along in a resigned, overcast-skies sort of way, and after about 30 or 40 minutes you start saying to yourself, “Jesus, this thing is going to stay on this level all the way through to the end, and I’m stuck with it.”

I know I’m supposed to say that Cicely Tyson‘s walk-on part as the mother of a deceased Vietnam vet rocked my realm, but it mostly registered as a “good enough but calm down” thing.

Here’s what I wrote to a critic friend the day after seeing Last Flag Flying:

“My instinct is not to dismiss this too quickly or abruptly. Sometimes less can be deceptively more, I’m thinking, and so perhaps I should give this meandering little film the benefit of the doubt by thinking it through a bit longer. But I can’t find anything beneath what my initial impressions were, which is that there just isn’t much here.

“I kept waiting for something truly intriguing, significant, jarring or emotionally moving to happen, but nothing ever did. It’s just a series of modest little road-trip episodes.

“The scene that pops the most, I suppose, is the airplane hanger scene when Carell witnesses his son’s dead and disfigured body and learns the truth about what really caused his death. I started to feel hopeful after this, but the film just settled back into a kind of lazy sluggishness after this, and nothing really happened.

“A very minor film, I’m afraid. If you compare it to Hal Ashby’s The Last Detail (and how can you not?), it falls short in every regard — story, dialogue, performances, flavor, humor, emotional impact.

“Remember that great marital argument scene between Ethan Hawke and Julie Delpy in Before Midnight? I was hoping that Linklater and Ponicsan’s energy might try to go in the same direction and that something charged and confrontational might manifest at the end, but alas…no.

“What is it really saying? That it’s tragic and unbearably sad to lose a son, that official authorities are never to be trusted, that guilt can linger for decades or a lifetime, and that loyalty among men who’ve served in the military lasts forever.

“I’m quite irritated that the Last Detail character names have been changed…VERY irritated. Coarse & boozy Sal Nealon/Buddusky calls bullshit on everyone and everything. Mulhall/Mueller hobbles around on a cane, laments Buddusky’s alcoholism, and gradually lets his real self emerge. Meadows/Larry ‘Doc’ Shepherd weeps for his son and his recently deceased wife.

“I saw it Wednesday evening at 7 pm, and the after-vibe was one of vague confusion and befuddlement. The conversational huddles I heard were along the lines of ‘uhhm, what was that? Am I missing something? Did you read the book?,’ etc.

** The events of Poniscan’s “Last Detail” book, published in ’70, were supposed to be happening in ’68 or ’69, or just shy of 50 years ago. Ashby’s Last Detail film was released in ’73, which obviously makes it 44 years old. But the Last Flag Flying story takes place in ’03, or 30 years after the movie came out, which is why I used the above shorthand description — “a 30 years-later Last Detail sequel.”