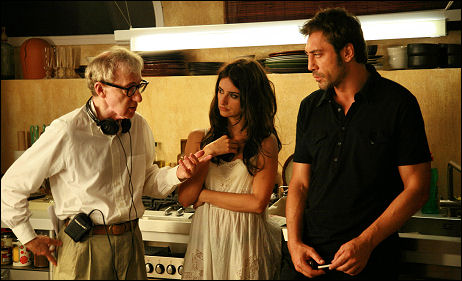 As is, VCB is about a couple of American girls — Vicky (Rebecca Hall) and Cristina (Scarlett Johansson) — getting romantically involved with Bardem (and to a lesser extent Cruz) during a summer in Barcelona, and the hard fact is that Johansson and Hall are nowhere near as interesting as their Spanish-born costars.
And yet Vicky Cristina Barcelona played better at Monday’s night’s premiere screening in Westwood than it did for me in Cannes, and I’m trying to figure out why.
One reason had to do with mere suggestion, I suppose. The crowd at Westwood’s Village theatre laughed heartily at just about every joke and visual inference, and the press people in the Grand Palais last May were much more subdued. Another persuader was the fact that I read David Denby‘s review of Allen’s film just before the Village screening, and an observation of his had a surprising effect.
One of my beefs against Vicky Cristina Barcelona when I reviewed it on 5.16.08 was the incessant narration. I described it as “persistent, obnoxious and thoroughly unwanted” and said that it made “this story of overlapping, off-and-on love affairs in present-day Barcelona so on-the-nose and over-explained that I was feeling actively hostile less than 15 minutes in.” 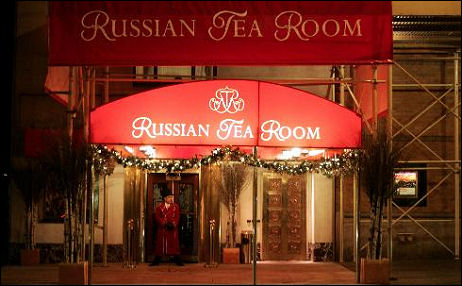 Denby, however, wrote the following: “Allen uses a narrator (Christopher Evan Welch) to explain who the women are, and, at first, it seems as if the director is just filling in backstory and telling us things we might have noticed ourselves. But this narrator does for Allen what narrators once did for Francois Truffaut — he allows him to skip merely functional exposition and jump from highlight to highlight.”
Truffaut! A light went on. Or rather, I found myself gradually succumbing to a cousin of the movie lover’s “Russian Tea Room syndrome.” Legendary critic Andrew Sarris described this back in the ’80s as a willingness to not only accept but applaud speed-bumpy things in a foreign-language film (precious-sounding dialogue, say, or a clumsily-composed narrative) that an American viewer might reject outright if included in an English-language film, and especially a Hollywood-produced one.
An hour or so after finishing the Denby review (which I read while sitting at Jerry’s Deli), the lights came down at the Village and I began watching Vicky Cristina Barcelona with the idea that it was, in fact, a French-language Truffaut film, and it played like a whole different animal. Not painful, not prickly. Not first-rate but a mostly agreeable thing.
I still preferred Cruz and Bardem’s scenes to everything else, but the narration didn’t get on my nerves because it was now the narration in Truffaut’s Two English Girls or The Woman Next Door,and that was okay. 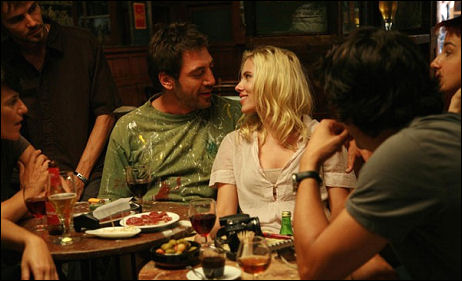 It still felt as if Allen was faintly mocking his own writing style and penchant for having his characters forever going to musuems, chatting in cafes and talking about artistic longings…aaah, I’m blathering. My basic point is that it played better the second time so do what you will. Odds are you’ll have a pretty good time with it.
Of course, if you’re under-25 you won’t go at all because GenY audiences, to go by the box-ofice track record of Allen films over the last eight or ten years, are averse to the Allen sensibility.
I want to repeat one complaint from last May, which is Allen’s no-naked-breast- shot rule. “He’s telling a story that’s swimming in mad erotic currents,” I wrote, “and yet he’s clearly decided against boob exposure — not even a casual random glimpse. It’s obviously unnatural and un-European. Presumably this was about avoiding an R rating, but the oddly prudish vibe works against the story and the general mood, so why even pick up the brush if you’re afraid to paint a nipple?”