Jezebel deputy editor Dodai Stewart has posted descriptions of and excerpts from the script for Matthew Wilder‘s Inferno: A Linda Lovelace Story, which may go before cameras with Lindsay Lohan in the title role. 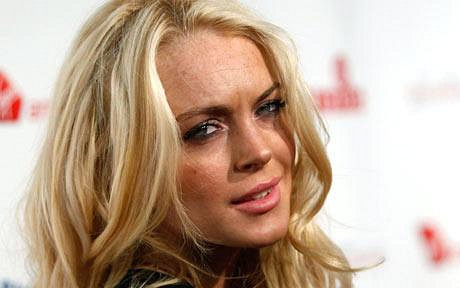 More than a few sites have described Wilder’s script, which may have a certain integrity on the page but also sounds like a sleazy exercise. It somehow feels less dicey to link to Jezebel‘s story about it.

The script is “full of sex and dirty language,” Stewart says, and with “downright harrowing” depictions of ugly humiliations that Lovelace suffers at the hands of husband/manager Chuck Traynor (as well as her own mom).

I don’t know about this. It feels icky and wrong. Lohan is an adult, of course, but a wobbly one of late. And it almost seems as if she, like the wounded Lovelace before her, has been somehow “played” into agreeing to perform this part. Lohan seems so wrecked and weakened in her own right — why would she want to add Lovelace’s anguish to her own?

“The first disturbing scene (on page 10) involves a young Linda being smacked in the face by her mother, who also burns her daughter’s hand with a Bic lighter. But the real terrifying stuff happens between Linda and Traynor, who humiliates her during a sexual encounter, making her say, ‘I’m stupid’ and ‘I’m a fat fatass’ as he fingers her and brings her to orgasm.

“Just a few pages later, Chuck, wearing big Frye boots, kicks Linda until she is bruised all over, and then, to comfort her, kisses her bruises — then pushes hard down on the bruises as foreplay. 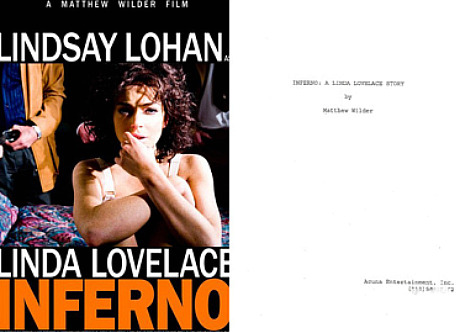 “From there, things just get worse: Chuck coerces Linda into turning tricks; her first encounter is in a seedy motel with five middle-aged businessmen. One fondles her breast while singing a tune from Mary Poppins. Later in the script, she gets a strange boob job, cooks naked and gets a violent spanking from Chuck. She cries — sobs — while making the legendary film Deep Throat, and has a foursome with Sammy Davis Jr. at Hugh Hefner‘s Playboy Mansion, where there’s also a crowd that urges her to have sex with a German Shepherd.

“Linda and the dog, Fritz, do not actually engage in intercourse,” Stewart reports. “Linda gets on all fours and waves her butt in the air and the pooch gets freaked out.

“The story is detailed, vivid and lurid, and some of the lines Lindsay Lohan will recite are a definite departure from her Disney career.

“But the truth is, the script is actually incredibly well-written. If handled properly, it could be a sex/drugs/violence retro classic in the vein of Boogie Nights. The material is there.

“Does Lindsay Lohan have the talent to play a confused, controlled, emotionally and physically abused woman trying to claw her way to a normal life? Probably. Will she surprise everyone by turning in the performance of a lifetime? Maybe. Will she show up to the set? Unsure.”