Shark Tale With A Cheap Streak 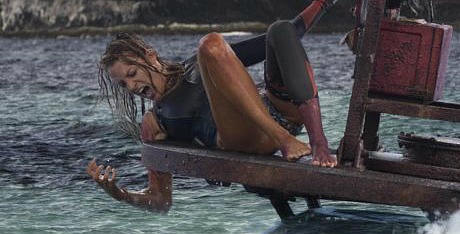 SPOILER (as if anyone cares): There’s a ten-minute passage in which Sharky eats two and a half guys and he’s still after Lively. Correct me if I’m wrong but sharks are instinct-driven leviathans who eat when they’re hungry and don’t eat when they’re not. Right? They’re not squirrels. They don’t store up for the winter.

Continuing Sharky thought-balloon: “Wow, that first guy tasted great! I love it when they scream and howl, and then all that blood and bone…yum! The younger victims always taste better, and those internal organs are like strawberry shortcake. And then I grabbed another young guy. Couldn’t believe my luck! And then the legs of a third guy….am I dreaming? Two and half bodies, enough to sustain me for several days if not a week.

“But I still haven’t eaten whatsername and that’s the main thing here. It’s not a matter of hunger or nutrition or instinct. This is a totally personal mission and I want that aching, moaning Texas blonde between my jaws, damn it. And I’ll save the head for last. That’s what the screenwriter (Anthony Jaswinski) and the Columbia executives who developed and financed this movie want me to do, at least. What can I do — argue? I’m a CG creation and I do what they say. Whatever your complaint is, I don’t wanna hear it.”

To summarize, I found The Shallows to be cheap, cloying, unnatural, silly. I still don’t know what happened at the end. And what a doctor Blake turns out to be — stitching her own leg, fixing a dislocated bird wing. (I wrote yesterday about “Steven Seagull.”) It was almost a poor-man’s All Is Lost in a way but saddled with the studio-required necessity to deliver a big climactic mano e mano. And there’s a one-year-later epilogue…forget it.

June 23, 2016by Jeffrey Wells17 Comments
« Previous post
A Certain Pattern
Next post »
“We Lived In A Society That Made Women Feel Vulnerable”