Ben Affleck, the Oscar season’s comeback kid with Argo‘s Golden Globe and BFCA wins following his Best Director Oscar nomination snub, took the stage last night at the Santa Barbara Film Festival to receive the Modern Master Award. All bets are off if Argo fails to win Best Picture tonight at the Producers Guild Awards, but right now Affleck is The Guy With The Momentum…a smart, smooth pro who knows how to play the game and who knows everyone and knows what’s good and what isn’t, and is basically on the Shining Path. 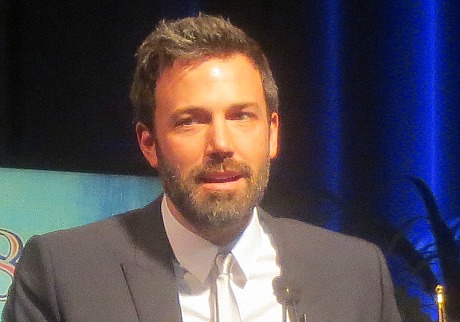 Taste is a result of a thousand distastes, and Affleck has learned the difference after going through the furnace in the early to mid aughts. He knows in his soul that he’ll never go back to the mute, flared-nostril horror of Pearl Harbor and Gigli and Bennifer. He’s learned, he’s grown, he knows what matters. And that’s what people will be voting for, I think, as well as the fact that they all really like Argo. Hell, I like Argo. I just don’t think it has enough subtext to be considered “great.” But it’s a very good film.

If Argo or Silver Linings Playbook don’t win the top prize at the Producers Guild Awards tonight, and more to the point if Lincoln wins, I’m going to jump off the Santa Barbara pier.

Bearded and affable and dressed in a dark, well-cut suit, Affleck submitted to a two-hour chat with Leonard Maltin, who never even mentioned the Best Director nomination snub or Affleck’s thoroughly honorable rep as “the new Sydney Pollack.” Not did Maltin ask about Affleck’s political passions or his recent encounter with Bill Clinton at the Golden Globe awards.

Their discussion was nonetheless pure pleasure. The 40 year-old hyphenate went into his usual appealing personality tapdance routine. Affleck is loose and likable and always with the clever, self-effacing quips, fast footwork and whipsmart assessments. He’s been professionally humping it since he was 14, or just over 25 years. Affleck knows everyone and has a ton of great stories to tell, and he’s a gifted raconteur.

Matt Damon, Affleck’s childhood pal, a fellow Bostonian and creative partner on Good Will Hunting, showed up and at the end and handed Affleck the festival’s Modern Master trophy.

I went over to the small after-party, and Affleck came in soon after and started talking with Indiewire‘s Anne Thompson and In Contention‘s Kris Tapley and…I wanted to say hi and offer good wishes (50% of me wants Argo to win Best Picture because it’ll be a good thing for Affleck, whom I personally like and admire, and 50% of me wants Argo to win because this would mean the stopping of Lincoln). But then the travelling fatigue wrapped around my soul like a banshee and took me down.

I slipped out and walked back to the Holiday Inn Express on Haley Street. Honestly? This is a cooler, spiffier place than the Hotel Santa Barbara, where the festival has been hosting me for the last four or five years. The hi-def flatscreens are much better (i.e., made within the last three or four years) than the semi-rickety ones at the Hotel SB. 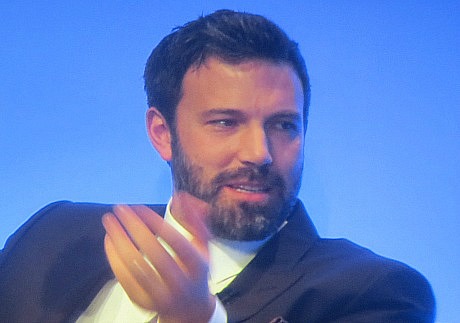 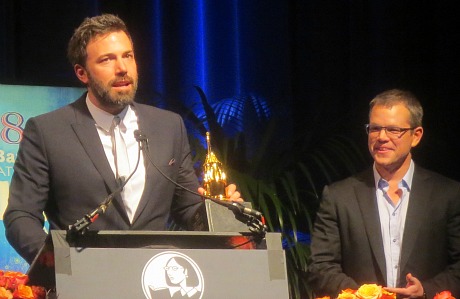 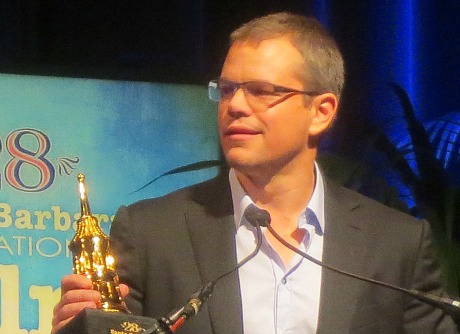 Question for Hollywood Reporter columnist Scott Feinberg, who took this video last night from his orchestra seat inside Santa Barbara’s Arlington Theatre: what about your camera’s zoom function, ace? Who am I to talk, right? I was sitting just a few seats away with my Canon 300 Elph and was too lazy to shoot anything myself.