A little more than two years ago I ran an early Shoot ‘Em Up piece, which was basically about the long hard effort that director-writer Michael Davis underwent in order to get the film funded by New Line Cinema with the help of producers Don Murphy, Susan Montford and Rick Benattar. (New Line execes Jeff Katz and Cale Boyter oversaw things for the studio.) Since then it’s been the usual usual — principal, test screenings, re-shoots, etc. — and now, finally, with a September 7th release date in place. 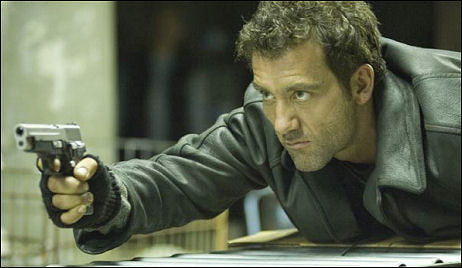 It began filming in Toronto in early ’06 and wrapped in April, and then Davis cut it over the the next five months or so, and then along came some AICN reactions to a Pasadena test screening last November — mostly positive and one slam.

These and other reactions convinced New Line to fund two days of additional shooting (a new beginning and ending) that happened early last month with star Clive Owen. The film is now set to open just after Labor Day, which some people will tell you is a “dump” date. On the other hand Transporter and Crank — two analagous films — opened on or close to September 7th and did pretty well.

There’s no Shoot “Em Up website that I’ve been able to locate (which seems odd), and there’s no teaser-trailer in “new releases” section of the New Line website. (Here’s a rough cut of a teaser that Latino Review ran last fall.) Someone in New Line’s online marketing branch is feeling under-energized, but the pre-release hoo-hah will almost certainly kick in once the summer season begins.