I received a DVD screener of Shortcut to Happiness last week, but I lent it to a friend last weekend and only got around to watching it this morning. It opens in six mid-size burghs (Las Vegas, Rochester, Fort Myers, Columbus, Albuquerque and Santa Fe) on 7.13 on its way to the bargain bin. 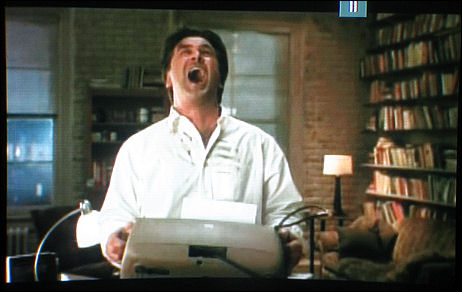 Alec Baldwin directed a version of this film six years ago (in addition to starring and producing) before washing his hands and having his name taken off — the direction is now credited to “Harry Fitzpatrick.” I reviewed the whole story last October, and the N.Y. Post ran a little thing on it today.
I knew this reputed train wreck of a movie would be problematic, but you always have the hope that it won’t be totally forgettable and that at least part of it — a scene, a line of dialogue, anything — will be worth the effort of watching.
There’s one moment that qualifies. It’s an anger scene with Baldwin, who’s playing the lead role of a frustrated, somewhat talented writer who sells his soul to the devil, played by Jennifer Love Hewitt, in exchange for “success.” We all know that Baldwin does anger pretty well, and here he gets to do one of those self- loathing, had-it-up-to-here, “I can’t do this anymore!” scenes that climaxes with his throwing an IBM Selectric out of his living-room window. It comes around 20 or 25 minutes into the film, and it’s the first scene that doesn’t feel poorly written or badly acted or just plain inert. It feels hard and real.
It got me in particular because I’ve experienced a little writer’s rage myself. Most of it when I was younger and hadn’t yet figured out how to let it out, and or at least write with a semblance of assurance. Mainly when I was struggling with low-pay freelance work and living on Bank Street in the West Village, back when I had to use white-out to fix errors and when little dabs of white-out would stain my jeans and shirts.
On top of which Baldwin’s flying-typewriter scene reminded me of Jane Fonda doing precisely the same thing in Fred Zinneman‘s Julia (1978), when, as Lillian Hellman, she sends her Underwood crashing through an upstairs window of a Cape Cod cottage she’s living in with Dashiel Hammett (Jason Robards).

July 10, 2007by Jeffrey Wells12 Comments
« Previous post
Paramount theatres on the lot
Next post »
Moore vs. Blitzer and Gupta