Shortcut to Happiness, the Alec Baldwin– directed film that was previously known as The Devil and Daniel Webster, is finally opening in U.S. theatres on 7.13 after a delay of approximately six years. I wrote about it last October, but Shortcut may have endured the longest post-production, delayed-release period in the history of motion picture distribution, which easily qualifies it as one of biggest train wrecks of all time. 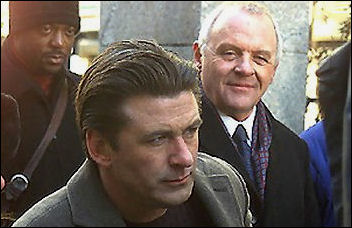 New York or L.A. critics looking to see and review it for history’s sake are facing a problem though. A publicist working for the Yari Film Group, the film’s distributor, told me this morning that neither screenings nor theatrical bookings are scheduled for LA, NY or New Jersey. She said it will open on 7.13 in only six cities — Las Vegas, Rochester, Ft. Meyers, Columbus (Ohio), Alberquerque and Santa Fe. The publicist graciously offered to send me a DVD screener.
Baldwin directed, produced and costarred along with Anthony Hopkins and Jennifer Love Hewitt. The plot — an ambitious young Manhattan guy sells his soul to the devil in exchange for worldly success, and then hires an esteemed old-school lawyer to get him out of the contract — is a late ’90s rehash of Stephen Vincent Benet‘s story and Archibald Macleish‘s play.
Baldwin had his directing and producing credits taken off eons ago because his edit of the film (allegedly a dramatic ensemble piece with “dramedy” undertones) was taken away by the producers and recut into a comedy.
Yari Flm Group has decided against giving director credit to “Alan Smithee”, the fake industry pseudonymn that turns up on IMDB listings 28 times. Instead, the “directed by” credit has been given to the non-existent Harry Kirkpatrick, according to the YFG publicist.
Last October I called Shortcut to Happiness (then known as TDADW) is “a pre-9.11 nostalgia movie….look at the stills of Baldwin as he appeared while directing the film and compare them to how he looks today — he was a kid! Hopkins hadn’t made Hannibal, Red Dragon or The Human Stain when TDADW was shot, and Hewitt’s feature film career hadn’t yet gone into the crapper.”