Showest, the longstanding exhibitor convention, kicks off in Las Vegas today. Exhibitors attend because…I don’t know, ask them. It’s basically a dog-and-pony show (stars, speeches, product reels). Trade journalists attend for exhibition stories, for the relationship-fortifying schmooze opportunities, and to report on the product reels (or the occasional debut of a new trailer that hasn’t gone online yet). 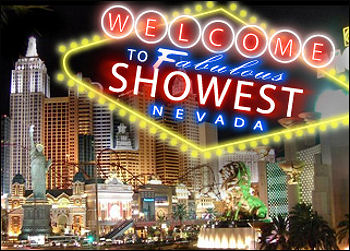 I haven’t attended since the mid ’90s. I had a perfectly miserable time. Vibe- and energy-wise it felt like the exact opposite of being, say, at a great big-time film festival or even a small cool one — like I was marooned on another planet with a bunch of chowderheads who didn’t know any more than I did and were basically there to kick back and maybe enjoy a nasty experience on the side. (Which is what all middle Americans imagine they’ll do when they visit this grotesque town. And which 99% of them don’t have the balls to even attempt.)
I wouldn’t dream of going again. I hate Vegas anyway, and I can get whatever news that may come out of it right here at my desk.