The Critics Choice Awards group, a distinguished and influential journalist org that plays a big annual role during award season, gave me the boot today because of that post that was up for maybe an hour or so, a post that contained a discussion about the ramifications of the recent Atlanta killings and how this might tangentially stir the pot as far as Oscar considerations were concerned.

Tonight The Hollywood Reporter‘s Scott Feinberg reported about the CCA hoo-hah and the whys and wherefores of my briefly exposed HE post, which I wrote about yesterday.

Feinberg: “Wells, who regularly sparks controversy with his riffs on Hollywood and social issues, most recently provoked widespread outrage with an article that he posted and then deleted on Wednesday, but which others screengrabbed and posted to social media. The piece featured speculation about the implications of Tuesday’s shootings at Atlanta-area Asian spas on the Oscar prospects of the Chinese director of Nomadland, Chloe Zhao, and the American film about Korean immigrants, Minari. Wells attributed those views to unnamed ‘friendos’ with whom he says he conversed.”

Here’s what I gave Feinberg, quote and reaction-wise:

“To know that I won’t be getting the usual swag and DVD screeners during the ’21 and ’22 Oscar season, and not attending the Critics Choice awards show at Barker Hangar…that’s not the end of the world. Not to me, it isn’t. But dodging the slings and arrows of the woke mafia is harrowing and upsetting and quite an ugly thing to experience. 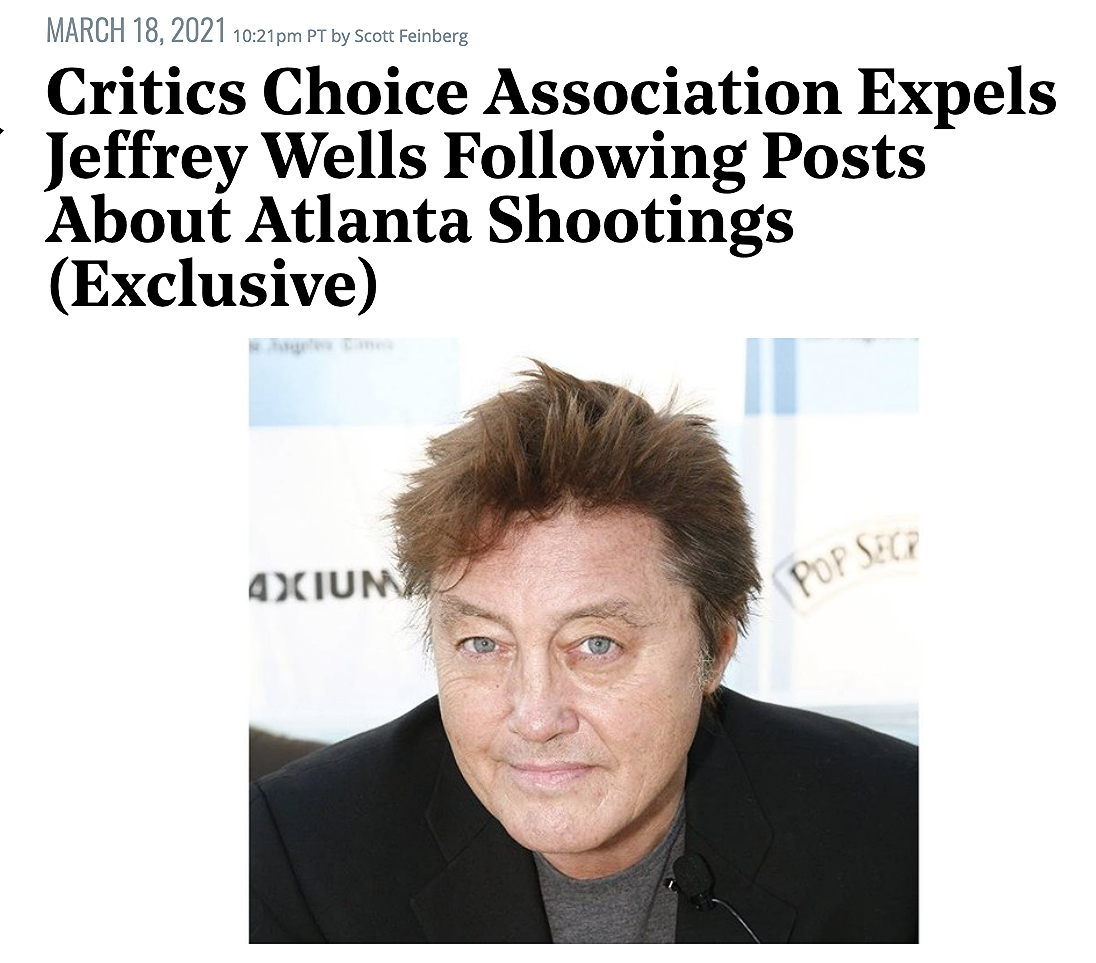 “All I did was briefly and rather stupidly post a digressive conversation, an odd tangent stemming from a terrible tragedy…a digressive dicussion that anybody might have voiced or been privy to at any social gathering, if we were having social gatherings. People in my world consider all the currents and echoes and side issues… everything swirls together. Knowledgable people consider all the angles.

“It was the wrong thing to post yesterday — I obviously got that and took it down as quickly as possible when I realized what the reaction was. But when the Twitter wolves are agitated and salivating and thirsty for blood, they copy posts and pass them around like deranged hyenas.

“Wokesters are the plague and the brain police of our time, and I just hope Michael Haneke or somebody like him makes a film about them some day. If William Burroughs were alive and well he’d have a field day with these monsters.

“Obviously I realize it was a mistake to mention something as trivial as the Oscar race in the middle of a terrible crisis, hours after the killings were first reported. I obviously understand that. I obviously made a big mistake. I realized my error very quickly and took it down as quickly as possible. Mistakes happen.

“[But] every so often I’m reminded just how extreme our culture has become in persecuting people for what they think and what they say. My mistake was obvious, but I especially erred by posting a digressive discussion at the wrong time.

“We’re living in a time in which someone can lose their job or their platform for something they write. We live with this reality every day. I’m imperfect. I run my own business. I sometimes get it wrong or cross lines. But today’s climate is horrific. Terror and intimidation is part of what we’re all living through now.”

Here’s an extra passage I wrote after Feinberg’s story had been filed: “It’s an especially hard climate for journalists these days. Are we living through Invasion of the Body Snatchers? So many journalists are afraid of losing their jobs and they all understand what they have to say and not say. They all know the woke code that they have to speak in. As do I. And there’s no percentage in not playing along for the most part. I play along a lot, but every now and then I go blurp-blurp and something else comes out.”

I only regret that THR used a photo of me from my wine-drinking days. It makes my face look rounder and softer than it is these days, and my hair looks too Walkenish.