Israeli journalist Yair Raveh of www.cinemascope.co.il reports that Israeli marketers for The Simpsons Movie “recently sent out Simpsons treats to newsrooms and writers, but the content was less than appetizing. Journos brave enough to put the red blob in their mouths said it tasted horribly. The general hope is that the movie will be better.’ Donuts, it should be added, are not easily found in Israel but it’s still unclear how they managed to mess this up so badly.” 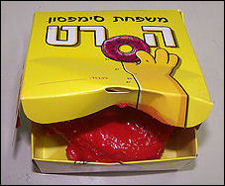 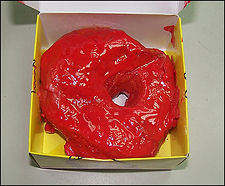 The Simpson’s Movie, Raveh adds, “is being released day-and-date in Israel and the States, but was not screened here to critics at all. Fox here bans all critics, not only the online ones, but everyone is too chickenshit to rally up and counter-ban.”

July 24, 2007by Jeffrey Wells19 Comments
« Previous post
Saying no to something or someone
Next post »
“Monstrous” doesn’t get it