A Single Candle On The Cake 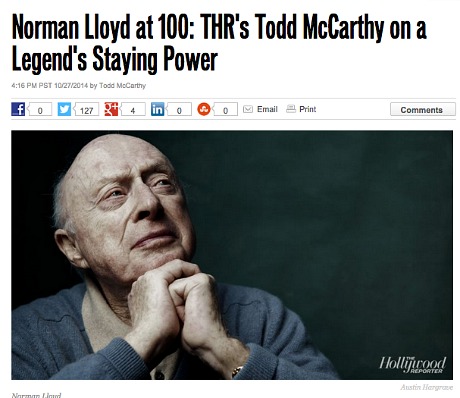 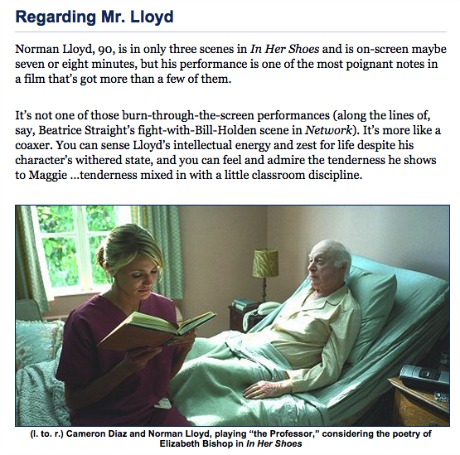 Norman Lloyd, 90, is in only three scenes in In Her Shoes and is on-screen maybe seven or eight minutes, but his performance is one of the most poignant notes in a film that’s got more than a few of them.

It’s not one of those burn-through-the-screen performances (along the lines of, say, Beatrice Straight’s fight-with-Bill-Holden scene in Network). It’s more like a coaxer. You can sense Lloyd’s intellectual energy and zest for life despite his character’s withered state, and you can feel and admire the tenderness he shows to Maggie …tenderness mixed in with a little classroom discipline.

At first Maggie is reluctant, then she agrees to read to him…slowly, almost pain- fully…I have a dyslexic friend and she doesn’t read this slowly…but she gradually improves.

Then Lloyd prods her into explaining what she thinks of the poem. She tries to duck this, but Lloyd — using skills he’s picked up during a lifetime of teaching — won’t let her. 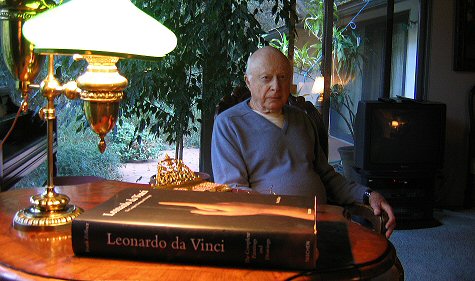 There’s a brief scene near the end of the film in which Diaz and Lloyd’s grandson — a doctor — talk about him and then how Lloyd has spoken about her. Lloyd is “there,” so to speak, and like Bishop’s poem, the subtext is loss.

It’s funny, but I feel as if I’ve known Lloyd all my life via his performance in Alfred Hitchcock’s Saboteur, and now, in my mind (and everyone else’s, I’ll bet, once the film opens), he’s back again and on the map.

I called him yesterday morning and did a quick interview, and then I drove over to his place in Brentwood in the late afternoon to snap a couple of photos.

He was told about the In Her Shoes part by his agent, Merritt Blake, and went down to meet with Curtis Hanson and producer Carol Fenolen. 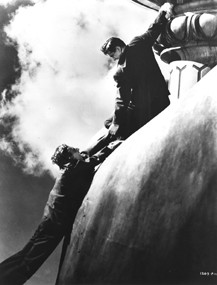 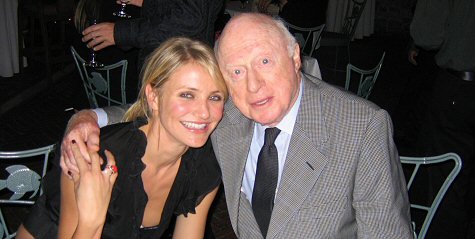