Jason Reitman and Diablo Cody‘s Tully (Focus, 4.20) is more of a potential awards-bait vehicle for Charlize Theron than a Reitman comeback thing, which is what I was sensing after catching the trailer a couple of weeks ago.

Tully is a better film than Reitman’s disastrously received Labor Day and Men, Women & Children, so it’s an image-burnisher to some degree. But it’s on the slight side.

Cody’s script is amusingly sharp and sardonic, and Theron’s portrayal of Marlo, a stressed suburban mom coping with pregnancy and child care, is her boldest since playing an alcoholic writer in Reitman and Cody’s Young Adult (’11) and her most Raging Bull-ish performance since Monster (’03), lumbering around Tully with her Aileen Wournos bod. 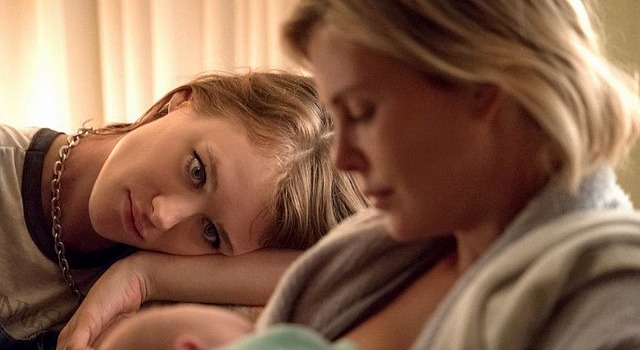 I don’t know if Academy members will be cherishing Tully ten or eleven months from now, but Theron’s performance is angry, open-hearted, prickly, lived-in — an obvious awards-level thing.

Tully is partly a family-unit sitcom and partly a tricky psychological drama. It mostly takes place in a New York-area suburban home occupied by Marlo, her husband Drew (Ron Livingston) and their three kids — a special-needs six year-old boy, a slightly younger girl and a just-born infant.

It’s one of those stories that (a) portrays a problem and then (b) introduces an outsider who not only makes things better but becomes a kind of magic healer. The question is how this agreeable situation will pan out in the long run.

With Drew barely paying attention to the kid-rearing situation, focusing on his job during the day and playing video games at night, pregnant Marlo is exhausted — whipped — by maternal responsibilities. And then the baby arrives and the burden is even more crushing with middle-of-the-night feedings and wailings and whatnot. So Marlo’s rich brother (Mark Duplass) tries to persuade her to accept the gratis services of a night nanny — a younger woman who will drop by in the evening and take care of the baby so that Marlo can get some much-needed shut-eye. 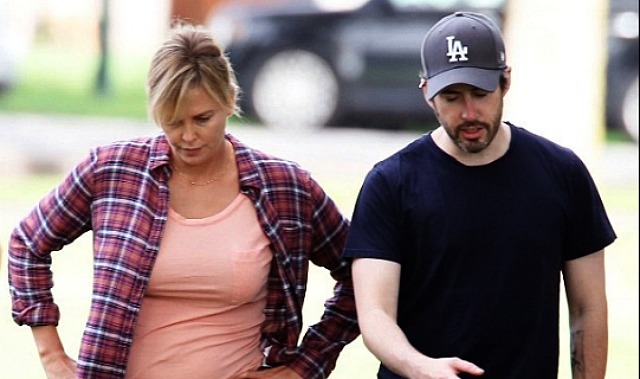 Marlo initially resists the idea (even with Duplass offering to cover costs) but eventually she succumbs. A night or two later the slightly eccentric Tully (Mackenzie Davis) knocks on the door. Marlo finds her a bit weird at first and a little young for the job, but Tully, a seasoned nanny, gradually gains her trust, and then her friendship and affection.

Before you know it the extra sleep Marlo is getting ushers in comfort and even serenity. Tully becomes a godsend, baking cupcakes and offering general household support and even providing extra-curricular assistance for Marlo and Drew’s diminished sex life. For a while things are really right.

Where will this story go? Will Marlo, Tully and Drew fall into an ongoing menage a trois relationship? Will Marlo and Tully become romantically entwined and therefore the new heads of the household? Will Drew and Tully pair up and abandon Marlo? That’s what you’re asking yourself, at least.

And then Marlo and Tully decide they need a girl’s night out in Manhattan. And then something unexpected happens.

And that’s as far as I can go. The ending of Tully is interesting but not, I have to say, altogether satisfying. The plot strands don’t entirely mesh. Remember the old film-school lesson about how every story starts with an inciting incident, and how this incident should ideally arrive between page 25 and 30? Well, Tully doesn’t have a big inciting incident. Things just move along on a beat-by-beat, nudge-by-nudge basis. I was asking myself “is anything going to happen here or what?” And then something finally does in Act Three.

Tully isn’t Reitman’s comeback but a reminder that he’s better than his last couple of films. It’s less angsty and dysfunctional than Young Adult but is generally on a similar level. But it’s not as good as Thank You For Smoking or Up In The Air. Not even close.

I’m presuming that Reitman’s The Front Runner, a drama about Gary Hart‘s campaign meltdown in 1988 that will open later this year, will connect in a bigger way than Tully. But who knows? Hugh Jackman will play Hart with Vera Farmiga, Sara Paxton, J. K. Simmons, Molly Ephraim and Kevin Pollak costarring.