A Slumdog Millionaire issue has been gnawing away since I fell for it in Toronto nearly three months ago. I was wowed by this film — throttled. The injections of extreme verve and jolt-cola pizazz by director Danny Boyle are impossible to resist or dismiss. But I couldn’t believe in the world of the story, partly due to the fever-like sell going on all through it, and partly due to the undercarriage of the main character, Jamal (who’s mostly played by Dev Patel). And that’s a bit of a nag. 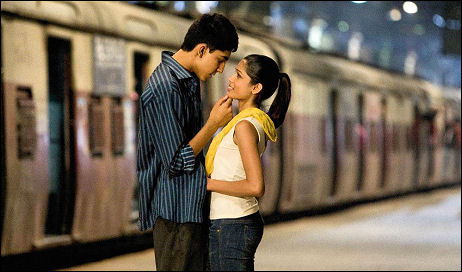 Talk to a Slumdog fan and they’ll probably tell you that the hyperness is part of the enjoyment — you don’t buy it but you love the intensity of the Bollywood-ish ride and particularly where it takes you at the conclusion. Slumdog is a show, but as much as it thrills and excites I feel that a truly formidable Best Picture contender needs to finally be unconcerned with the sell and confident enough to just “be.”

This isn’t to say that the presentation of Slumdog isn’t a kick-ass thing, or that the people who love it are somehow misguided in believing it has more Best Picture juice than any of the other hotties out there. LAFCA and NYFCC critics may or may not give it their Best Picture awards, but the Oscar rumble isn’t wrong. As things seem now, it will probably take the prize.

I’m still down with Slumdog for the most part. If it wins I won’t go into convulsions like I did when Chicago beat The Pianist. I love the life-force of it, the fusion of third-world squalor and the classic chops of Charles Dickens , the go-go swirl, the Boyle-ness of it. What other major director would have thought to make such a film in such a way?

It’s just that I couldn’t shake an awareness that every step of the way I was being subjected to a romantically simplistic blitzkreig — a steroid Dickens fable with a hero I very much liked and felt for but couldn’t finally accept. 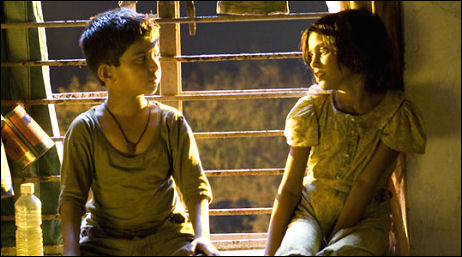 How can anyone watch Slumdog and not be down with Jamal’s enormous dignity, strength of spirit and intelligence? And I understand (or think that I do) that Jamal’s life story is primarily a device that allows Boyle to dramatize the evolution of Mumbai chaos-culture over the past 15 or 20 years.

But I just can’t believe that a kid who’s been subjected to such relentless cruelty and brutality his entire life — slapped, beaten, exploited, betrayed, booted, whipped, shat upon and made to suffer like a homeless dog day after day, year after year — would end up with this much patience and resolve and focus. Treat an actual dog like this and he’ll be incapable of showing anything but his canine teeth.

Nor did I believe that the beautiful Freida Pinto‘s Latika wouldn’t be soiled and corrupted by her upbringing also, or that she’d stay emotionally loyal to and in love with Jamal through thick and thin. Things change, people grow up and move on, life is hard, get what you can whenever you can, and nobody will save you but yourself. I know, I know…surrender to it, believe in love.

But the cruelty in this film is relentless. Ugly behavior reigns through the first two acts. Except for the cop (Irfan Khan) who interrogates Jamal throughout the film, nearly every male character in Slumdog Millionaire is a cutthroat Fagin or Artful Dodger. Snarling, feral, pitiless. 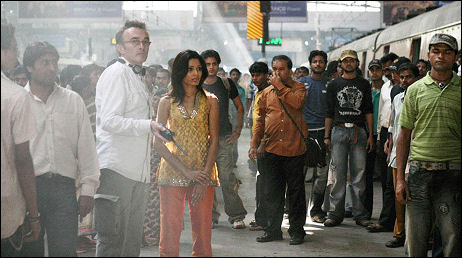 And all through Slumdog I was muttering to myself how much I hate the Mumbai overload — the poverty, the crowding, the noise, the garbage landscapes, the public outhouses, the ugly high rises…the whole squalid cornucopia of it. I’ve never been especially interested in visiting urban India, but Slumdog settled things once and for all. If someone slips me a first-class Air India ticket from JFK to Mumbai, I’m trading it in for passage to Vietnam or China or Kampuchea or Katmandu.

I was amused by what HE reader arturobandini2 said yesterday: “Don’t look for Slumdog to take top critics’ honors. But if SAG strikes, I predict it’ll be the Academy’s Best Picture winner. Mainly as a fuck-you gesture to actors from the rest of Hollywood.” Spot-on, love it. SAG members will deserve a hearty eff-you if they go on strike.

Slumdog may also triumph, he feels, “because it has a feel-exuberant finish, which the other contenders don’t have. The Academy fogies cream their Depends over that kind of ending, especially in a recession. I don’t particularly like the movie, but I witnessed the fever spreading in the theater like turbo-bacteria. The momentum seems undeniable.”

My deep-down suspicion after seeing Slumdog in Toronto, one that I kept to myself, was that the Academy bluehairs might back away somewhat because of the total absence of local talent. This doesn’t seem to have kicked in at all, however, and that in itself is very cool. In this spirit a Slumdog win could be seen as kindred to the election of Barack Obama. Black president, brown movie.