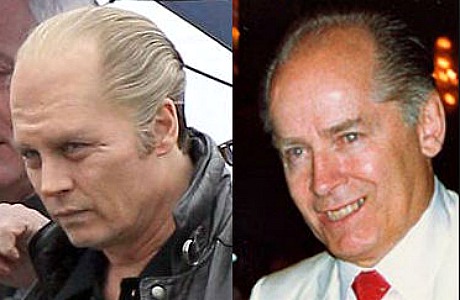 The basic conveyance in Berlinger’s doc is that, yes, Bulger was a harsh, ruthless murdering thug and so on, but he didn’t get arrested for years and years because he was an informant for the FBI and was therefore protected. For years Bulger allegedly fed that agency information against the Boston Italian mafia, and in exchange for that assistance the FBI let him do whatever, including clipping people whom Bulger felt needed to be clipped . In short the Feds enabled him. When he finally stood trial last year (i.e, June through November) for murder and drug trafficking and whatnot, Bulger faced highly incriminating testimony from three former colleagues who had flipped and agreed to rat him out (i.e., Kevin Weeks, John Martorano, Stephen Flemmi). The result was two life terms and then some. Berlinger explains how Bulger has been adamant all along that he wasn’t an FBI informant. The evidence in Berlinger’s film makes that assertion hard to believe. The suggestion is that ratting is such an intolerable concept, particularly for an Irish criminal who was raised in a culture that despised informing, that Bulger felt compelled to deny this no matter what.

All in all Whitey is quite the fascinating tale (I wish I could have seen the somewhat longer version that played at last January’s Sundance Film Festival) and absolutely required viewing for anyone planning to see Cooper’s Bulger film when it opens next year.