A friend asked yesterday if I’d heard of the passing of Mariangela Melato, 71 — the co-star of Lina Wertmuller‘s The Seduction of Mimi (’72), Love and Anarchy (’73) and Swept Away (By An Unusual Destiny in the Blue Sea of August). Melato was right smack in the heat of the hip-film-world zeitgeist back then, and she had, I’ve read, a full life and a thriving career after that, or at least up until a year or so ago when she began to come to grips with cancer. 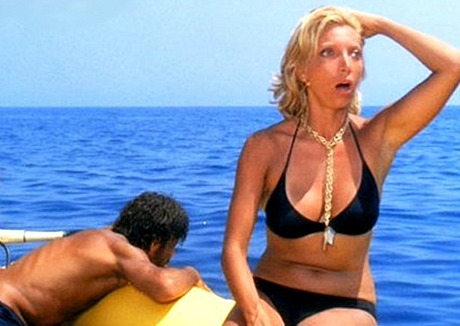 Anyway I said to my friend that yes, I’d heard, and due respect but I couldn’t think of what to say off the top of my head. For me, Melato stopped being an actress of even limited interest after her Wertmuller run, or after Swept Away. I’m sorry but no other films she made seemed to break through and that was that. And that’s a long time to keep a tiny white candle burning in a cathedral. But I’m sorry for her passing. A life lived to the utmost. Condolences to friends, fans, colleagues.