Almost three weeks ago Variety reporter Jeff Sneider got angry about publicist Kelly Bush having supplied an exclusive production story — i.e., Christopher Nolan deciding to direct Interstellar, a Paramount project based on his brother Jonathan’s script — to the Hollywood Reporter‘s Kim Masters instead of himself. Masters filed her story about Interstellar on Wednesday, 1.9, at 6:44 pm, and Sneider filed a terse follow-up version at 6:55 pm. 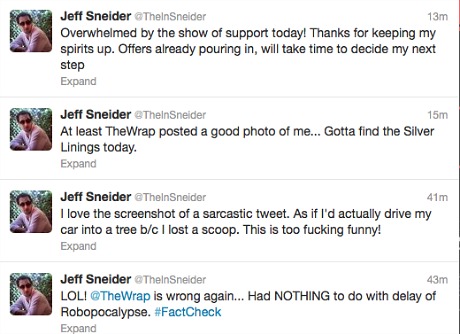 Sneider expressed harsh words about this to a certain party during Sundance, and somebody complained about Sneider to Variety owner Jay Penske, who was giving Sneider death-ray looks to begin with. In any case Sneider was whacked today for what TheWrap‘s Alexander Kaufman has described as “unprofessional” behavior. This refers to a flash of temper. Sneider tweeted news about the firing this afternoon around 2 pm. Sneider also tweeted that Kaufman got the story wrong by saying it had something to do with Masters beating Sneider on a story about Steven Spielberg indefinitely delaying Robopocalypse.

Sneider is a good and gracious fellow in HE’s book. Best wishes, best of luck, nothing changes.