A tale of a risky affair between a high-school teacher (Lindsay Burdge) and a teenaged student (Will Brittain), Hannah Fidell‘s A Teacher was a buzzy title at Sundance ’13. (Here’s my review.) The following year HBO announced a plan to turn the film into a limited series with Fidell again directing. Now it’s an FX project with Kate Mara in the Burdge role, and Nick Robinson as her 16-year-old lover. (Okay, maybe 17.)

May I ask something? When it comes to affairs between scampy teachers and male students (in real life as well as dramas), why do things always have to end in shame and prosecution? Why can’t they fall in love like French president Emmanuel Macron and Brigitte Macron did when he was a 15 year-old student and she was a 39-year-old teacher? Or what about a story about an inappropriate relationship that just comes to a gradual, no-big-deal end without the cops and the school principal getting involved?

My mother warned me once or twice about predatory women when I turned…oh, 15 or 16. I used to pray I’d get hit on. If I’d been lucky enough to connect with one of my attractive teachers when I was that age…well, my God! I would have dropped to my knees and given thanks to God the Father Almighty.

“The subject of a teacher-student affair may be tabloid fodder,” the Sundance press notes say about A Teacher, “but writer/director Hannah Fidell resists sensationalism or the temptation to pathologize her protagonist.”

I just saw Fidell’s film this afternoon, and boy, was I hoping for a little tabloid sensationalism! Or a touch of pathology. Or a smattering of half-interesting dialogue between the teacher (Lindsay Burdge) and the student (Will Brittain) that might add a little flavor or whatever.

We all know what lazy minimalism is. Especially when concerned with self-destructive, anti-social types. The director-screenwriter will (a) use only the faintest brushtrokes and (b) supply no hard info about who her characters are or what they’re running from or what they need…nothing. You have to sit there and just watch them do things that are stupid and wildly self-destructive and incomprehensible and then…you know, piece it together as best you can. Bad Lieutenant did this. Many indie films have done this. And it’s enervating and faintly boring.

Except A Teacher isn’t completely boring because Fidell is a fairly disciplined director. She knows how to drill in tight and strip away the extraneous and make it seem as if you’re watching something that might, you know, go somewhere. And Burdge and Brittain are, I admit, fairly intriguing in their radically underwritten roles. They know how to behave. 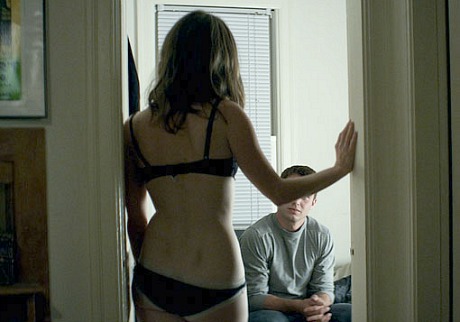 You know going in that the affair is going to blow up sooner or later. We’ve all read about real-life dalliances of this sort. The teacher is eventually found out, arrested and so on. So the question: what is it about Burdge’s Diana, a teacher at a high school in a semi-affluent Texas town, that will add to the basic drill? What will we learn about her that will turn our assumptions around or at least gussy them up? What will happen that will make this familiar tale seem stranger or darker or funnier than we might expect?

Answer: nothing. Fidell just shows us interesting natural atmosphere and good acting chops and behavior in and of itself, and then baby, you’re on your own.

The first thing we learn about Diana is that she’s fucking Eric (Brittain), a smooth, good-looking, rich-kid senior. They meet whenever and however, and all they do is fuck. They don’t talk, they don’t share, they don’t watch movies, they don’t cook meals, they don’t take walks…it’s all about the salami. And then we learn that she can’t stand her mother and refuses to talk with her, and that she has a strained relationship with her blase brother…blankness, blankness.

About three-fifths of the way through she freaks when she and Eric are fucking at his father’s ranch and a foreman shows up. Out of the blue she feels concerned about the affair being discovered and losing her job. And then she starts feeling repulsed by herself and vents this by rejecting Eric, and then she wants him again and he doesn’t want her and it all goes to hell.

Diana, in short, is a car wreck waiting to happen. Unstable, wired, crazy, not very bright, emotionally blocked, fucked up….and I’m watching a story about her because why again? Because I’m at the Sundance Film Festival and I had an open slot between 3 pm and 5 pm?