I had to read A.O. Scott‘s 9.20 Steven Soderbergh profile twice to grasp what it really was — a highly observant and mostly affectionate portrait of a detached (but impassioned!) tech-head who makes films about unknowable characters. Scott almost seems to fundamentally regard Soderbergh as a brilliant ditzoid — Fred MacMurray in The Absent Minded Professor? — who, like all scientists, cares more about his laboratory, test tubes, glass beakers and bunsen burners than he does for the public who may or may not buy the products that result from his experiments. 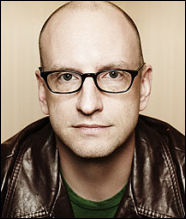 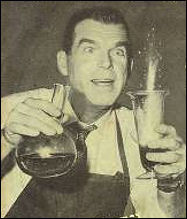 Soderbergh “may have zigzagged in and out of the movie-industry mainstream in the course of his career,” Scott writes, “but he has remained, throughout, to an extent matched by very few of his peers, an experimental filmmaker.

“He seems to approach each film as a problem, a hypothesis to be explored and tested in the course of production. And as an exercise, though that risks sounding dismissive and understating his creative zeal. The answers to core questions that lie at the heart of his films may not be, in the strict sense, scientific, but they are always, for Mr. Soderbergh, at least partly technical.

“The characters in [his] three most recent films are themselves part of the experiment. Che, The Girlfriend Experience and The Informant!, despite obvious differences of tone and narrative structure, make up a fascinating triptych. Each one is the portrait of a character who is fundamentally unknowable.

“Benicio Del Toro, behind his beard and his inscrutable eyes, is in the title role of Che an emblem of ideological commitment and military ruthlessness and yet also something of a cipher, the sum of his brave, bloody and foolish actions. And while Chelsea, the call girl played by the pornographic film star Sasha Grey, and Matt Damon‘s Mark Whitacre are continuous, dominant presences in The Girlfriend Experience and The Informant!, their motives, feelings and inner lives remain just out of reach.

“It’s as if Mr. Soderbergh is pointedly defying the imperative to make certain characters likable, sympathetic or, in the Hollywood jargon, relatable.

“Detachment may be the most radical aspect of Mr. Soderbergh’s experimentalism. His films often seem to be less about the people in them than indirectly and allegorically about themselves. Which is not to say that Mr. Soderbergh’s own art is cynical or solipsistic. Rather it is the self-awareness that makes it interesting, even when the experiments fail. As experiments will, more often than not.

“I will put my cards on the table and say that I have disliked quite a few, perhaps the majority, of Mr. Soderbergh’s movies of the past decade. I’ve been unmoved, perplexed, frustrated, repelled. But I’ve wanted to see them all more than once. And I always look forward to the next one. And I find it hard not to root for him or to avoid paying him a compliment that is sure to sound more like criticism to some ears, but is really an acknowledgment of the risk he takes, again and again.

“He cares more about the movies than he cares about the audience.” 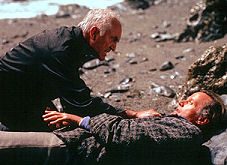 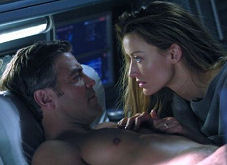 And I will put my cards on my table and say that except for Full Frontal and Solaris, those two mystifiers Soderbergh made during his notorious slump period (’01 to ’04), I too have watched and am ready to watch all his films repeatedly.

I have seen The Limey at least ten times and perhaps more. I have seen The Good German three times, Schizopolis twice, and Traffic a good six or seven times. I could watch the Che films another four of five times at least (and I probably will do this when the Criterion Blu-ray finally peeks out), having already seen them four of five times on big festival screens. I’ve seen The Girlfriend Experiment three times and would be ready and willing to watch it a few more times if there was only a little sex in it. A hand job, even.

When Soderbergh is on the stick and cooking with gas, he’s the best. I am very keen on seeing Knockout (especially with Lem Dobbs writing the script) and whatever the Spalding Gray thing turns out to be.

But honestly? I am scared shitless of the forthcoming Liberace movie (a kind of neutered atmosphere kicks in when Soderbergh deals with any kind of sexual vibe or atmosphere), and every night before I go to bed I get on my knees and pray that the Cleopatra musical never happens.