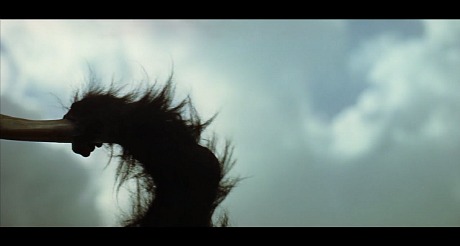 I love this portion: “I’ve seen every conceivable kind of film print of 2001, from 16mm flat to 35mm internegative to a cherry camera negative 70mm in the screening room at Warner Bros, and I’m telling you, none of them look as good as a Bluray played on an Pioneer Elite plasma Kuro monitor. and while you’re cleaning up your spit take over that sentence, let me also say i believe Stanley Kubrick would have embraced the current crop of digital cameras, because from a visual standpoint, he was obsessed with two things: absolute fidelity to reality-based light sources, and image stabilization.

“Regarding the former, the increased sensitivity without resolution loss allows us to really capture the world as it is, and regarding the latter, post-2001 SK generally shot matte perf film (normally reserved for effects shots because of its added steadiness) all day, every day, something which digital capture makes moot. Pile on things like never being distracted by weaving, splices, dirt, scratches, bad lab matches during changeovers, changeovers themselves, bad framing and focus exacerbated by projector vibration, and you can see why I think he might dig digital.”

I naturally tried to re-post the whole thing but Vimeo privacy settings prevent this.