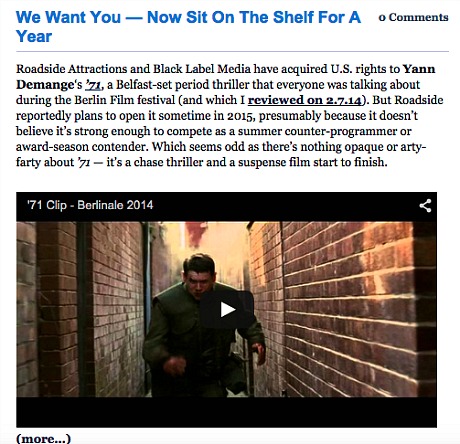 Here, for the second or third time, is my Berlinale review:

Excerpt #1: Yann Demange‘s ’71 is a Belfast-set action melodrama set during “the troubles” of that titular annum. It’s a high-tension throttle about a young British soldier named Gary (Jack O’Connell) who gets separated from his unit during a violent confrontation with an angry Catholic mob, and before you know it he’s more or less James Mason in Odd Man Out — a marked man behind enemy lines, weak and bleeding and trying like hell not to get plugged by IRA assassins, and forced to depend on the unlikely kindness of strangers.

But Gary’s odyssey isn’t just about hiding out and dodging capture with the help of this and that Good Samaritan (including a spirited young boy and a kindly Catholic doctor and his wife who risk brutal reprisals from the IRA). There’s also a double-agent/undercover game going on that pushes anxiety levels to the brink.

The emphasis here is on menace and fear and thrills and adrenaline. It’s not trying for the melancholy fatalism of Carol Reed’s 1947 classic. There’s no pulsing undercurrent except for similarities and associations with other films about the “troubles.” But ’71 delivers exceptional verisimilitude. In some ways reminiscent of Paul Greengrass‘s Bloody Sunday, this is a jolt-cola movie. 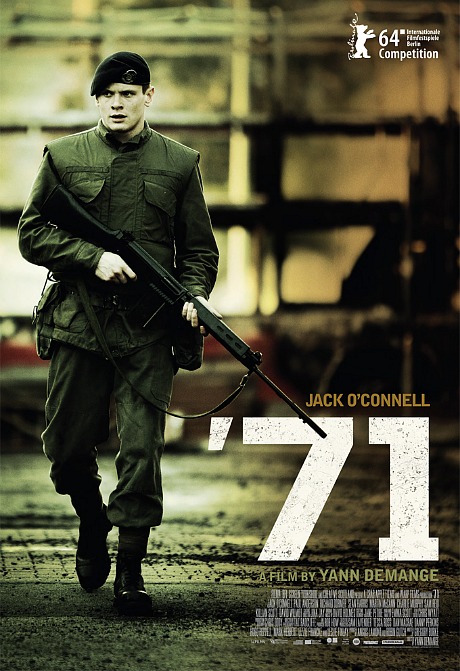 Demange definitely knows how to handle this kind of material. Gregory Burke‘s pared-down screenplay deserves a tip of the hat. And cheers to every one of O’Connell’s costars — Sean Harris, Paul Anderson, Sam Reid, Sam Hazeldine, Charlie Murphy and Richard Dormer are the stand-outs. 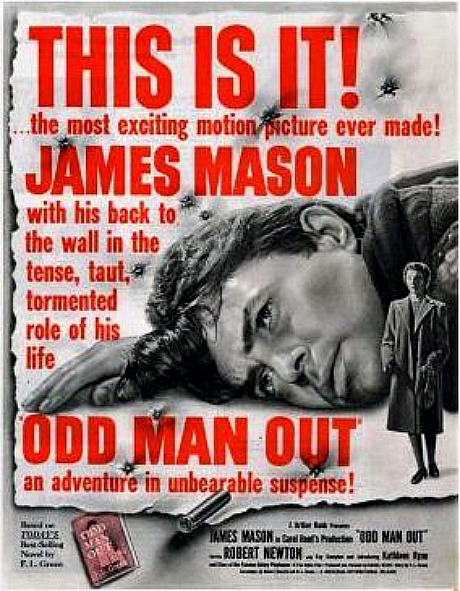 February 23, 2015by Jeffrey Wells3 Comments
« Previous post
They Done Her Wrong
Next post »
Cavett Also Went to The Mat on Vietnam