A few days ago I downloaded the latest software for the iPhone 4S. One of the results was a new proclamation in the top left corner that AT&T was generating a 4G signal. I didn’t notice any increased download speeds and didn’t think much of it, but two days ago tuaw.com‘s Richard Gaywood posted an article that called the change “faux 4G.” 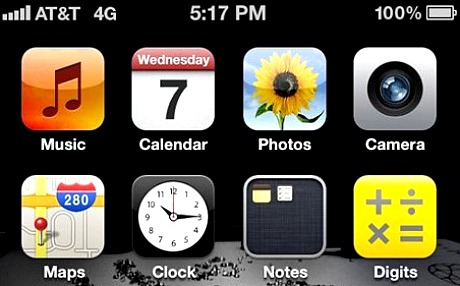 I have, however, noticed two intriguing changes within the last two or three days. I’m not saying they’re related to the software upgrade — only that I’ve just noticed them.

One, it used to be that I could only use Skype on my 4S when I used external Wifi. Now Skype works with the AT&T network. Update: This feature was apparently introduced last May, and I just didn’t notice. Return: The result is that I can now talk on the iPhone to anyone I’m Skype-connected with anywhere, and I can send live video to them also. Last night I was speaking on iPhone Skype to a friend in Berlin, and I showed her what I was doing as I shopped at a Gelson’s on Santa Monica Blvd.

And two, a Gmail memory-completion function works faster now. Previously when I would type out my email address the iPhone would wait until I’d typed out the entire handle plus the @ sign before completing the email address (i.e., gmail.com). Now it recognizes me while I’m still typing my handle — two or three characters in and it gets it….ping.