Roughly 16 months ago Terrence Malick was shooting the Austin-based “musical drama” once known as Lawless but now called Untitled Terrence Malick Project (2014). You can never trust the IMDB about release dates but it has the Austin flick opening in the Netherlands in early September 2014. We all know Malick’s tendency to dither in post but this film, which costars Natalie Portman, Michael Fassbender, Ryan Gosling, Christian Bale, Rooney Mara, Cate Blanchett, Val Kilmer, Benicio del Toro and Holly Hunter, could possibly screen at next year’s Telluride or Toronto festivals…maybe. 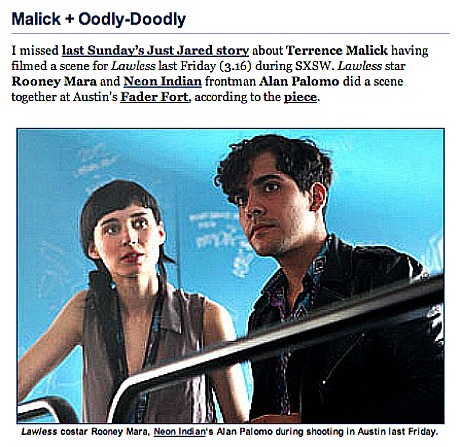 You can’t beat that IMDB logline: “Two intersecting love triangles…obsession and betrayal set against the music scene in Austin, Texas.” Plus loss and young love and birds and light and leaves and wheat fields and eagles cruising over the city. And squirrels and chipmunks.

But which of these actors’ roles will survive the editing process? Costarring in a Malick film is always a crap shoot — you might make the final cut and then again you might not.

Bale and Portman’s role are probably safe because they’re also the co-leads of Malick’s other unreleased effort, which most people know as Knight of Cups. Could they be playing the same characters in both films? It would be surreal for two Malick films to be released in the same year but when might Cups (which was shot after the Austin movie) appear? Malick’s films average roughly two years in post so I’m guessing it’ll be a 2015 release. Bets?

It’s probably safe to say that we’ll never see an actress solo-dance in swirly circles in a Malick film ever again. Doing this over and over and over in parks and fields and meadows in Malick’s Into The Wonder seems to have all but killed Olga Kurylenko‘s career.

“When the main character of the film changes in the editing room, you have a director who doesn’t know what he’s doing,” a guy called “Cinema Fan” wrote last August. “Any college (possibly high school) student could make what he does. Just shoot hours and hours of footage (it doesn’t matter what it is), randomly pull the film out of a canister and splice it together, and then have the actors say whatever they want in voice-over.”